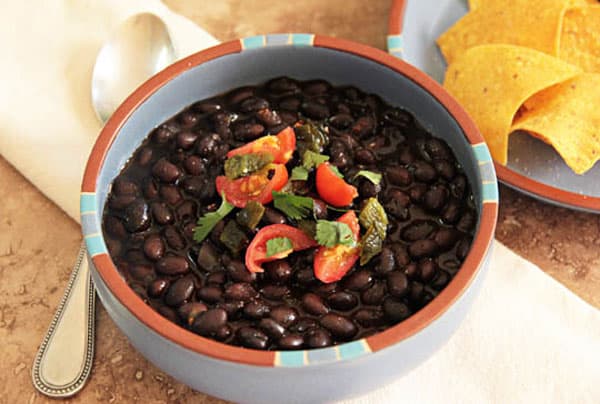 Today I’m featuring a pressure cooker recipe from MJ’s Kitchen. Black beans are MJ’s favorite bean and she doesn’t use canned beans because they’re often somewhat tasteless and mushy. She prefers to pressure cooks her beans which yields the best tasting beans possible in a relatively short period of time. My family prefers black beans too, so perhaps that’s why MJ’s post Cooking up a Pot of Black Beans caught my eye.

Cooking Up a Pot of Black Beans in an Instant Pot

An Instant Pot is one of the most popular brands of electric pressure cookers. They are easy to use and your Instant Pot can help you create this delicious Pot of Black Beans!

I asked MJ to tell me a little bit about herself so I could introduce her to my readers:

Many people have a fear of using a pressure cooker, but since my mother used one religiously, I’ve always treated it as just another tool in the kitchen. It was such a common tool back in the 70’s, that I received two of them as wedding presents.

My pressure cooker is a 70’s avocado green Presto. Yes, it is the one I got for a wedding present; therefore, it is as old as my marriage and has held up just as well. 🙂 I have had to replaced the rubber gasket and the automatic air vent a couple of times because of living in a dry climate where anything made of rubber eventually experiences dry rot. But other than that, this little cooker has cooked up more pots of beans than I could ever begin to count.

I really don’t use my pressure cooker for anything other than dried beans and peas, but I use it religiously for those. I cook 2 to 3 pots of beans a month, so it’s not a tool that collects much dust.

MJ’s secret to great beans is she soaks the beans in a brine before pressure cooking. A process she saw in Cook’s Illustrated. It softens the beans skin without breaking down the bean.

If you would like to have a recipe featured on Pressure Cooking Today, please contact me at pressurecookingtoday at gmail dot com.