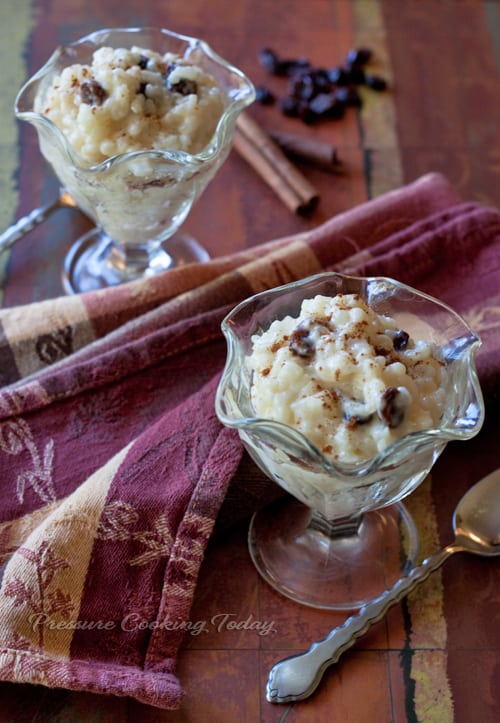 Rich, creamy rice pudding made in half the time in the pressure cooker. Serve it warm with a sprinkle of cinnamon, or if you prefer, cold with a dollop of whipped cream.

Before I got married, I worked in downtown Salt Lake City. Lamb’s Grill, which is “Utah’s Oldest Most Famous Restaurant”, was right next door to the building I worked in. Twice a day a group of us would go to Lamb’s for our coffee break. Since I’m not a coffee drinker, several times a week during our afternoon coffee break,  I would order Lamb’s delicious rice pudding. 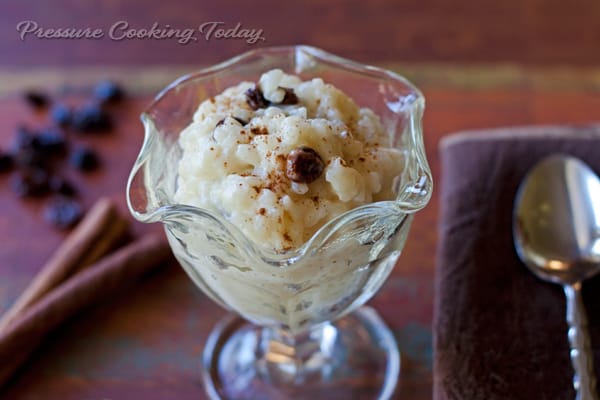 Years later, the Salt Lake Tribune printed the recipe for Lamb’s Rice Pudding. It’s a family favorite and I’ve made it more times than I can count. It was one of the first recipes I posted on Barbara Bakes.

An Instant Pot is one of the most popular brands of electric pressure cookers. They are easy to use and your Instant Pot can help you create this delicious Creamy Rice Pudding!

Update: I have an updated version, The Best Pressure Cooker Rice Pudding, that is quicker and easier than this recipe. Be sure and check it out too.

In pressure cooker pot, combine rice, sugar, salt, and milk. Select Saute and bring to a boil, stirring constantly to dissolve sugar. As soon as the mixture comes to a boil, cover and lock lid in place. Select Low Pressure and set timer for 16 minutes.

While rice is cooking, whisk eggs with half and half and vanilla.

When beeps sound, turn off pressure cooker, wait 10 minutes and then use a quick pressure release. Carefully remove the lid. Stir the rice in pot.

Stir the egg mixture in to the pot. Select Saute and cook uncovered until mixture just starts to boil. Turn off pressure cooker. Stir in raisins.

Serve immediately, or pour into servings dishes cool then chill. (Pudding will thicken as it cools, so you may want to add a little extra half and half if you’re serving it cold.)

Lamb’s always served it cold with a sprinkle of cinnamon on top, but I love it warm. Enjoy!