Ham slices steam roasted in the pressure cooker is the best way to warm up pre-cooked sliced ham. Heating Ham Slices in the Pressure Cooker is quick, easy, and doesn’t dry out your ham like heating it in the oven can. 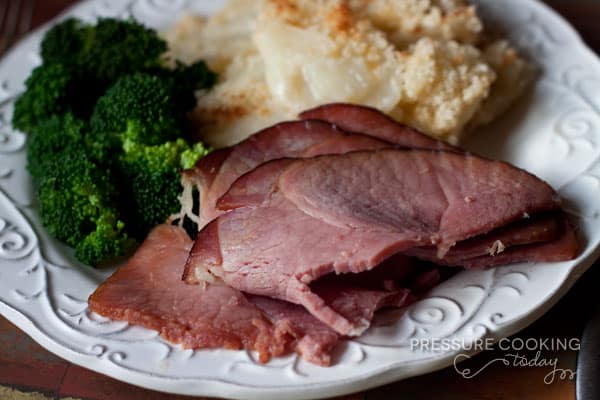 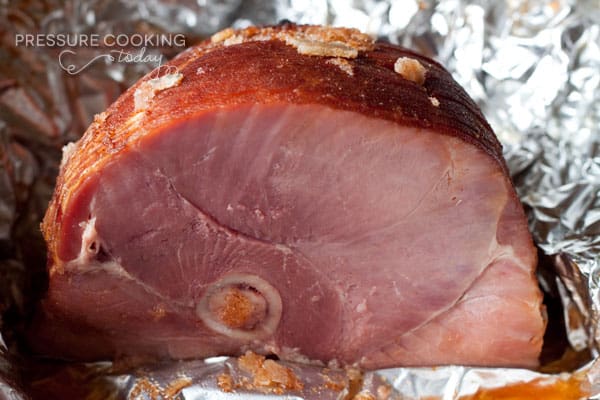 An Instant Pot is one of the most popular brands of electric pressure cookers. They are easy to use and your Instant Pot can help you in heating these delicious Ham Slices!

This year I decided that instead of baking the ham, I would steam roast my ham in my pressure cooker. Miss Vicke has a great post about steam roasting spiral sliced hams and I used that as a starting point.

I wanted my ham wrapped tightly in aluminum foil so that it would “bake” in the sweet glaze that Honey Bake puts on their ham. When heated, the glaze melts, which I like much better than in it’s crunchy form.

I bought a smaller mini Honey Baked ham. I don’t think a entire large Honey Baked Ham would fit in the pressure cooker, but you could certainly cut off some of the slices to heat them up. Only warm up as many slices as you think you and your family will eat.

Note: This method is not recommended by the Honey Baked Ham company, but if you’re a rebel and like their ham heated like I do, I think this is the best way to do it. 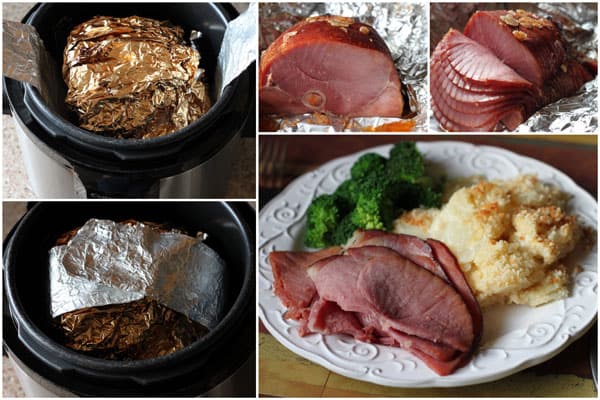 I’ve also cooked regular boneless ham slices in the pressure cooker wrapped in foil and that works out great as well. If you aren’t cooking a sliced ham, Miss Vickie has a great guide for cooking times for other hams.

Update: Here’s a video showing how easy it is to warm your ham in the pressure cooker without drying it out. Typically I would use my 8 quart pressure cooker for a ham this big, but it wasn’t available for the video. You can also cut off slices of ham and only warm up the slices you’ll need.

Remove ham from aluminum foil, cut the slices away from the bone and serve immediately.

84 comments on “Heating Ham Slices in the Pressure Cooker”