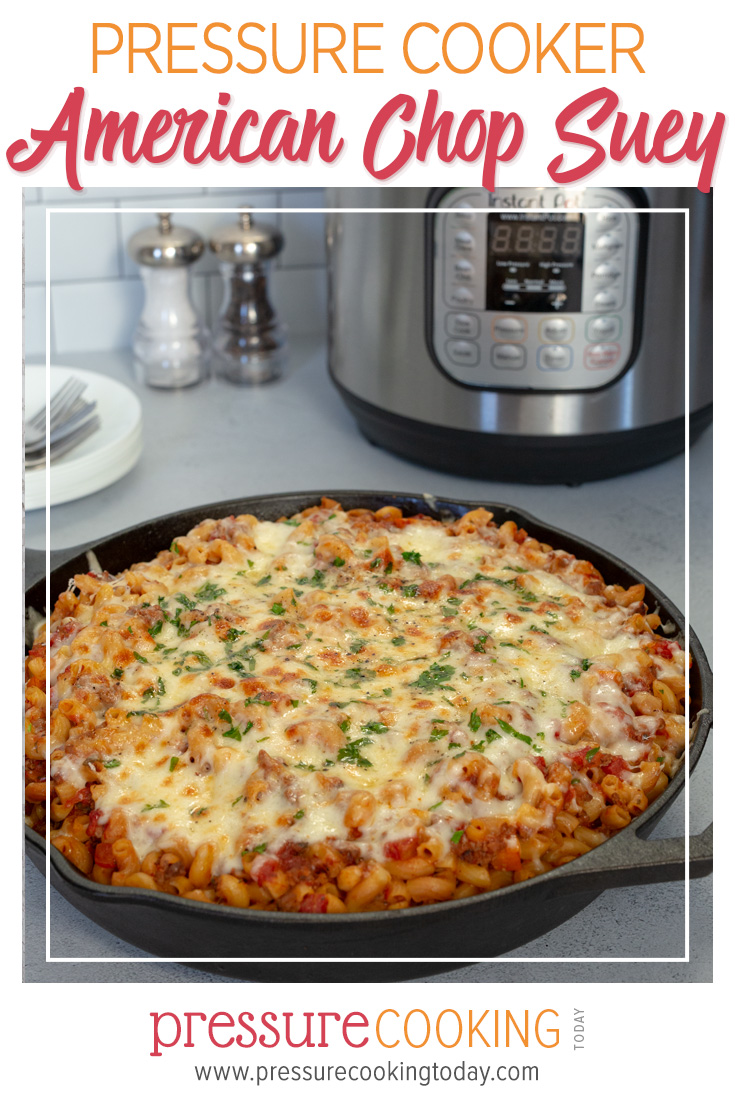 Instant Pot / Pressure Cooker American Chop Suey is a classic comfort food made with macaroni, ground beef, onions, and bell peppers—then loaded with mozzarella and finished in the oven until golden brown. This easy-to-make meal comes together quickly and makes a big enough batch to feed a crowd. 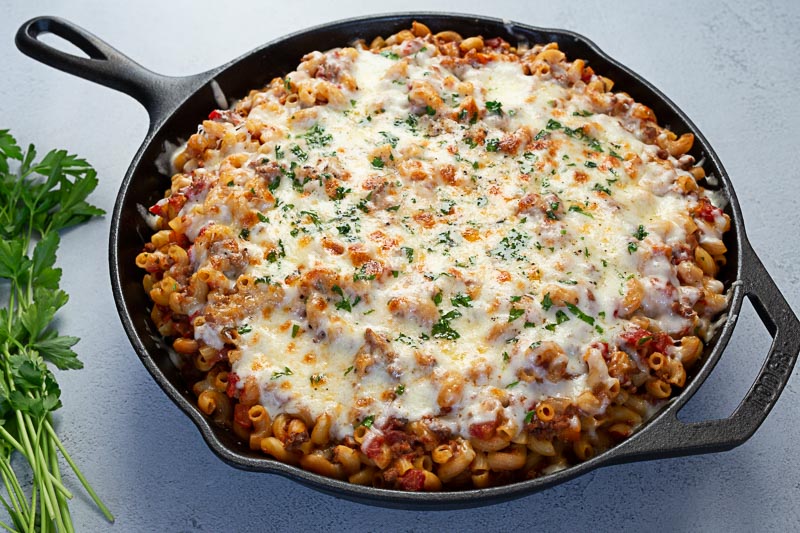 Jennifer here again! Recently my son was talking with my mom about how much he loves ground beef. So she sent me a link to American Chop Suey and said we should create an Instant Pot recipe for it.

What Is American Chop Suey?

I’d never heard of American Chop Suey before, but it turns out that it is one of those classic comfort foods that goes by a different name depending on where you’re from:

Beefaroni, macaroni and beef, chili mac, Johnny Marzetti: whatever you call it, this stuff is delicious. … This is a New England classic that ought to be eaten everywhere comfort and ease are appreciated.

It is made with macaroni noodles and ground beef in a thick tomato sauce. It’s similar to American Goulash or a made-from-scratch version of Hamburger Helper (aka hamburger mac). For some reason, growing up, my dad always called it “Goo-flop.” 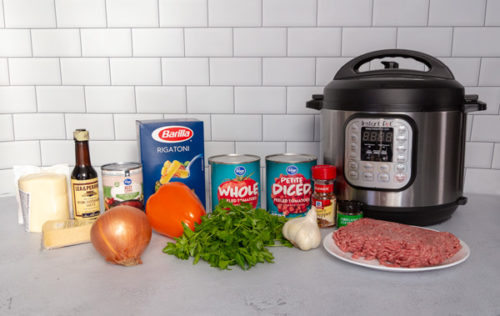 Why is it called American Chop Suey?

The only “Chop Suey” I’d ever encountered was the canned version I’d use to make stir fry in college: 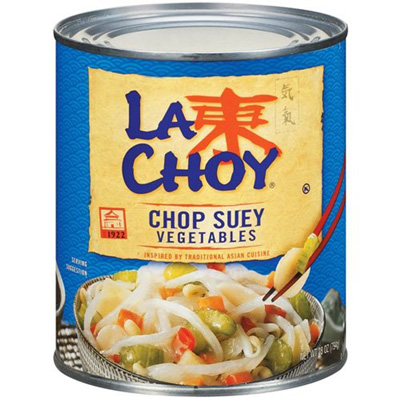 Clearly though, American Chop Suey has just the name in common with Chinese Chop Suey. From what I could tell, the term chop suey or “mixed bits” came to America from Cantonese. Over the course of the 20th century, the dish evolved from a Chinese staple to an Italian-American favorite.

In parts of New England in the 1950s, the dish was commonly made with onions, bell peppers, and a splash of Worcestershire sauce. The melted cheese is a more modern addition, but it takes this meal to the next level. 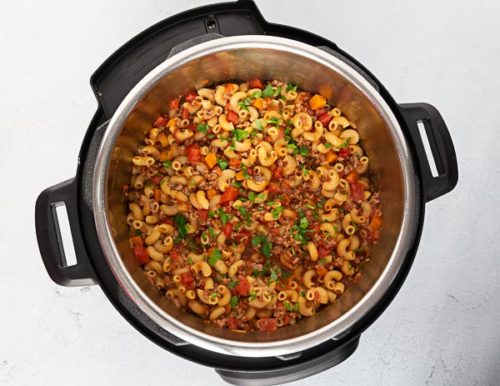 Making meals with thick tomato sauce can be tricky in an Instant Pot. Any thick sauce can sink to the bottom of the pot and cause a burn notice to appear.

To avoid this problem, this recipe uses pureed whole canned tomatoes and omits the sauce. In addition, we deglaze the pot with beef broth and scrape up browned bits for flavor. After deglazing and mixing in the Worcestershire sauce, put down your spoon! Pour in the macaroni noodles, then the blended tomatoes, and then the petite diced tomatoes, in that order. The tomatoes will cover the noodles to ensure that they cook, but the noodles will provide a barrier between the tomatoes and the bottom of the pot.

Since this cooks a large amount of pasta, it will take a while to come to pressure—between 15 to 20 minutes in our test. Once the pot has reached pressure, preheat your broiler and prepare the oven-safe dish you plan to use. This will help you transfer the dish from the Instant Pot to the oven quickly to get dinner on the table more quickly. 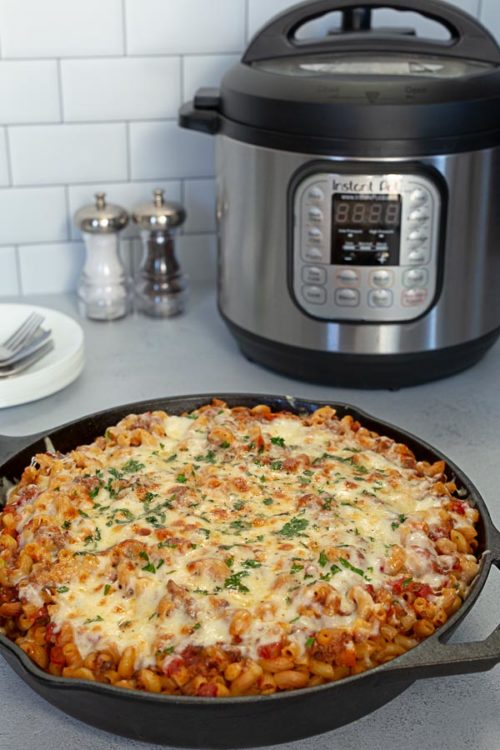 American Chop Suey can be a one-pot meal when you cook it in your Ninja Foodi! Follow the recipe as directed. However, instead of transferring the pasta to an oven-safe dish, carefully distribute the cubed mozzarella throughout the middle of the pressure cooking pot. (Be careful not to stir too much or the cheese will stick to your spoon.) Sprinkle grated mozzarella and Parmesan over the top.

Close the crisping lid. Select Air Crisp, set the temperature to 400°F, and set the cook time to 5 minutes. Push Start. When the cook time ends, remove the cooking pot to cool for 5 minutes before serving.

Nutrition information is calculated by Nutritionix and may not always be accurate. 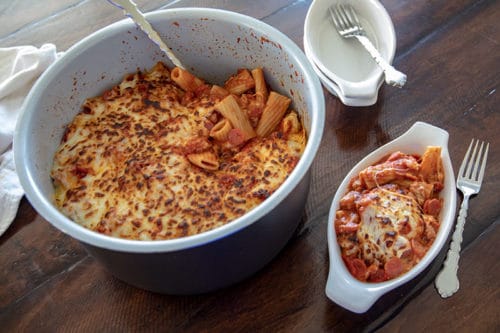 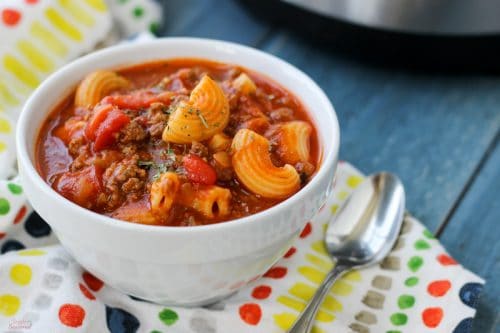 American Goulash is similar to American Chop Suey, but this recipe uses tomato sauce and omits the less-traditional cheesy layer. 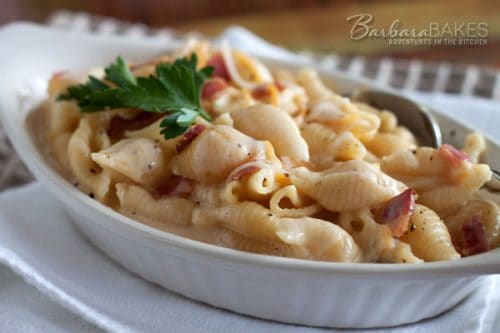 Macaroni and Cheese is a classic comfort food. This version cooks up quick in the pressure cooker and features cheddar cheese and bacon. 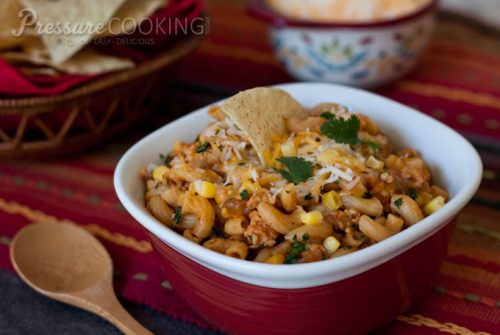 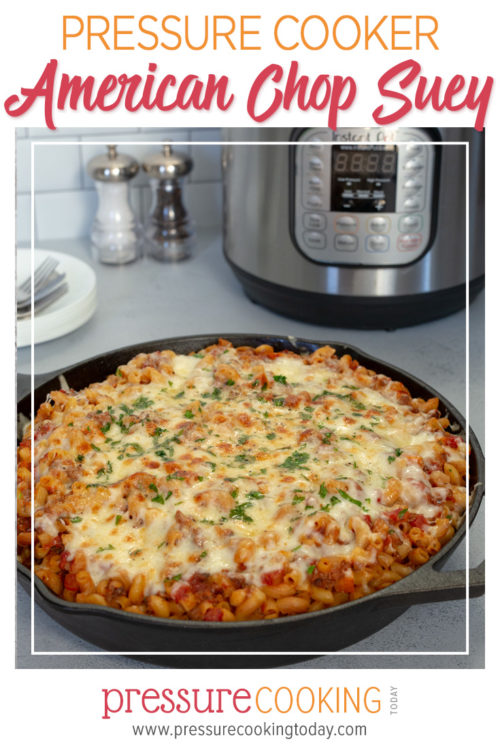