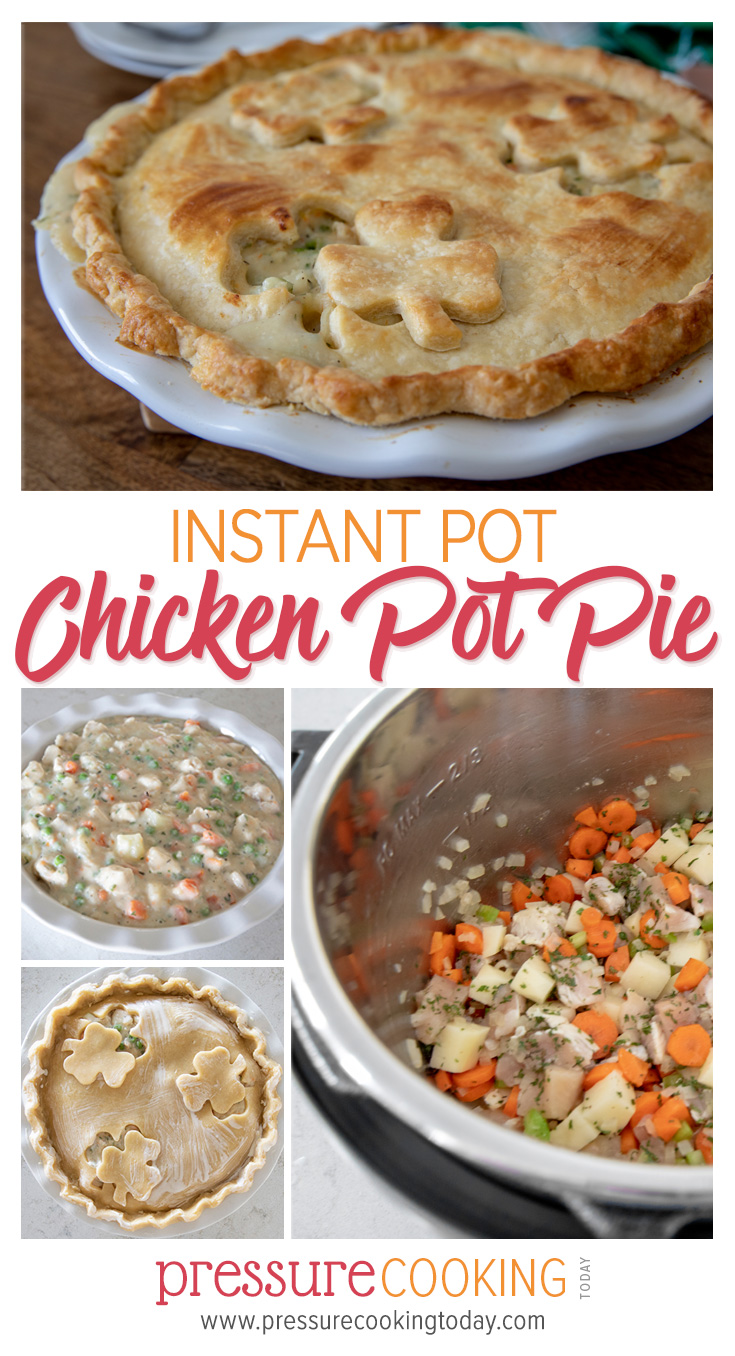 Homemade chicken potpie used to be a time-consuming meal that was saved for Sundays or special occasions. This Instant Pot / Pressure Cooker Chicken Pot Pie cooks the filling in your pressure cooker, so you can have this classic comfort food on your table in under 30 minutes! Serve it any night of the week! 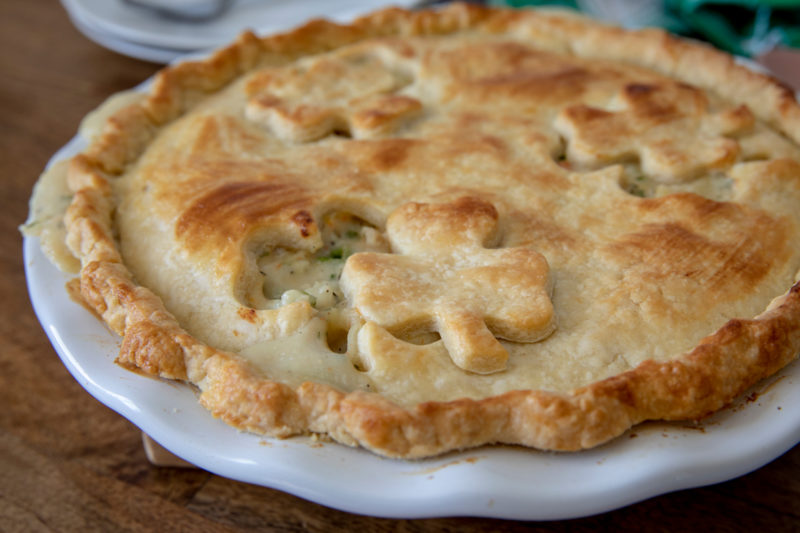 Hi everyone—it’s Jennifer! One of my favorite things about pressure cooking is that I can make a meal that seems time consuming but is actually quick and easy to get on the table.

Chicken pot pies are one of my family’s favorite dinners, and they often request it for St. Patrick’s Day. (I can’t remember why the tradition started, but it’s been part of our family for several years now.) A simple shamrock cookie cutter is all it takes to make this meal into a festive St. Paddy’s dinner. Change the cookie cutter and you can make any pot pie into a celebration!

The recipe I grew up eating calls for cooked, diced chicken. We’d often have to remember to grill up chicken earlier in the week so we’d have it on hand for pot pie.

With this pressure cooker version, you cook the chicken and potatoes at the same time, so the filling comes together quickly. (And you don’t have to remember anything in advance!) I like to use frozen vegetables in the filling as well, which saves a little extra time. I just throw these in after pressure cooking straight from the freezer.

This is a fairly forgiving recipe. Want more potatoes? Dice them up and have a thicker pot pie! Hate peas? Leave them out or swap them for corn or more carrots. If your favorite chicken pot pie recipe has a certain blend of spices, you can substitute those in this recipe as well. 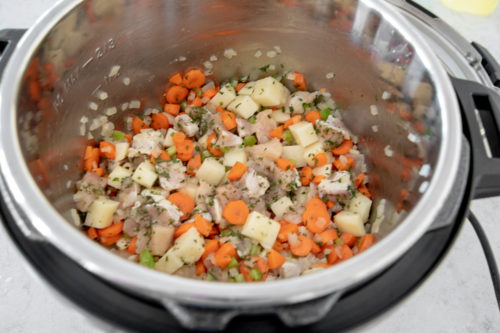 The thing that really brings everything together is the creamy, buttery pot pie filling. Stove-top recipes generally start with you making a roux—that flavorful mix of butter and flour used to thicken sauces.

However, you can’t pressure cook a roux—the flour can settle on the bottom of the cooking pot and mess with the pot coming to pressure.

So how to get an awesome stovetop taste in your pressure cooker? Make a “reverse” roux!

Rather than starting the sauce with a roux, the chicken pot pie filling is cooked with a little extra liquid and then the butter-flour mixture is stirred in after pressure cooking. This method gives you the convenience of pressure cooking without sacrificing the flavor of a traditional roux. 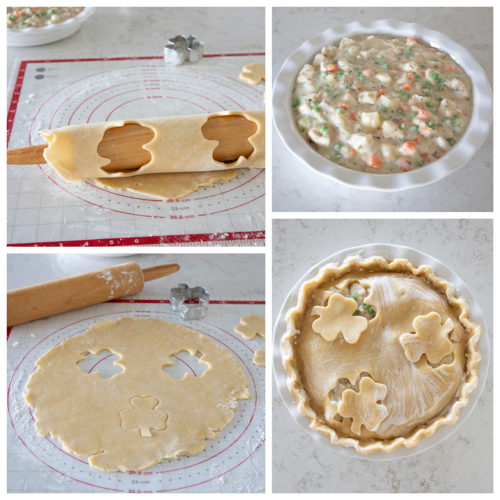 There’s no denying the convenience of store-bought pie crust, and I definitely use it on busy nights. (I like the Pillsbury refrigerated pie crusts.) So don’t let the recipe instructions for homemade pie crust keep you from trying this recipe!

Still, there’s something special about a homemade pie crust. Pie crust isn’t difficult to put together, especially if you have a pastry cutter. 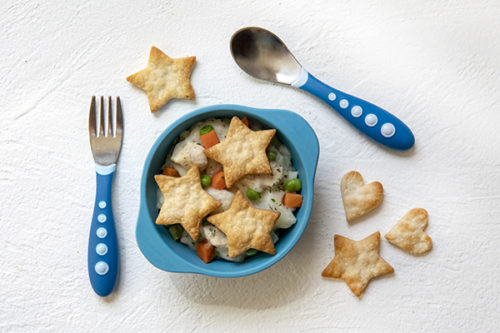 Chicken pot pie is so quick and easy to make in your pressure cooker. An Instant Pot is one of the most popular brands of electric pressure cookers. They are easy to use, and your Instant Pot can help you create this delicious Pressure Cooker Chicken Pot Pie!

Since this recipe is one of my kids’ favorites, we had to adapt it for our Instant Pot Toddler Food Cookbook. The black-and-white quick version is out now, and a full-color combined baby and toddler food edition with photographs will be out fall 2019.

The Toddler Chicken Pot Pie recipe features a thicker, heartier filling that’s easier for little ones to spoon up. It also uses cookie cutters to make fun pie crust shapes and bakes them separately in the oven while the pie filling is cooking in the pressure cooker.

Even though my boys are past their toddler years, they still prefer the pie crust made separately. They enjoy cutting out the shapes and enjoy the texture of the crust when it’s baked on its own. (When you bake the crust on top of the pot pie filling, the side touching the crust isn’t as crisp as when you bake it separately.)

I like making the crust this way because if someone doesn’t want to eat the crust—more for me! It also helps get dinner on the table more quickly. 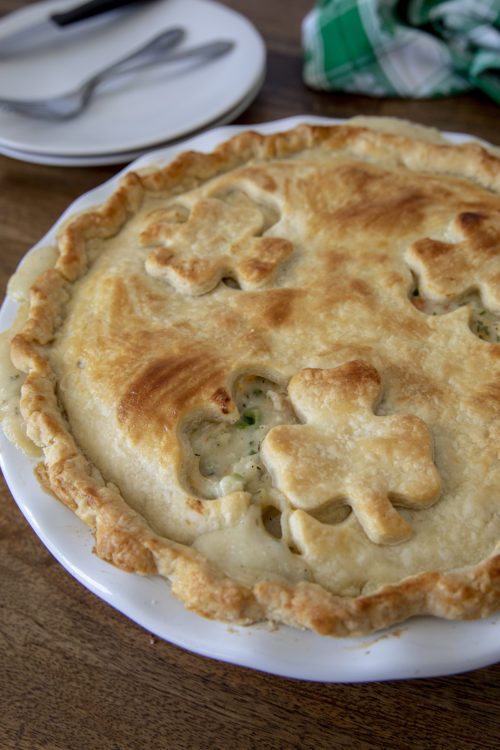 Chicken pot pie can be a one-pot meal when you cook it in your Ninja Foodi! Follow the recipe as directed. However, instead of transferring the pie filling to a glass dish, carefully lay the cut pie crust evenly on top of the filling mixture in the Foodi pot. (Fold the edges over if needed.)

* The prep time will increase to 10 minutes if you're preparing a homemade pie crust, with at least another 30 minutes of chill time. If you plan to make the pie crust earlier in the day, remove the chilled disc from the refrigerator when you preheat your oven.

***If you prefer, you can substitute 2 carrots, cut into 1/4 inch slices for the frozen carrots. 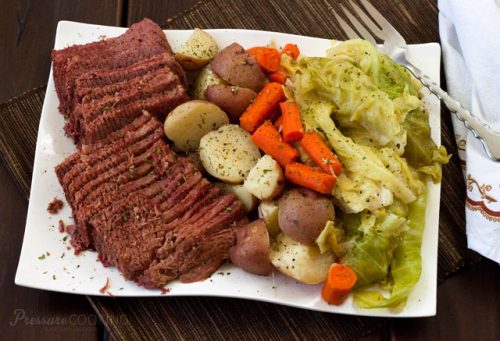 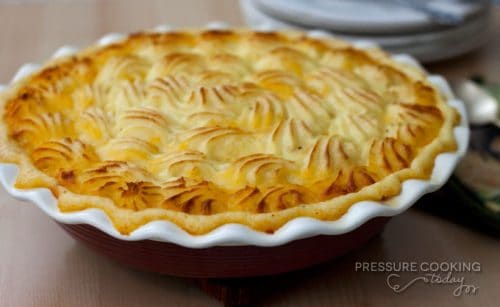 Pressure Cooker Shepherd’s Pie features creamy, cheesy mashed potatoes swirled on top of a rich, flavorful meat-and-vegetable stew. Making it in the pressure cooker gets it on the table in half the time! I used a star tip to pipe the potatoes on top to make it perfect for a celebration, but you can gently spread them on top as well. 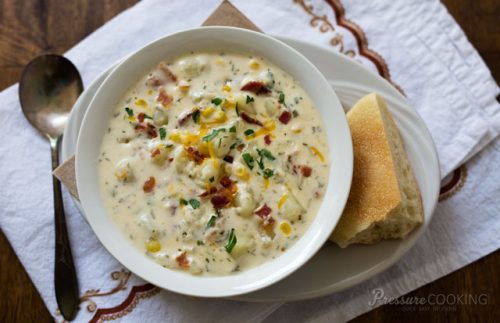 Instant Pot / Pressure Cooker Chunky Potato Cheese Soup is a hearty soup loaded with potatoes, bacon, corn, and cheese and is ready in just minutes. Cooking the potatoes in the steamer basket above the onions, broth, and spices infuses the potatoes with the great flavor of the soup without breaking them down. (For my fellow trivia junkies, check out this story on how potatoes came to Ireland and later spurred modern agricultural science.) 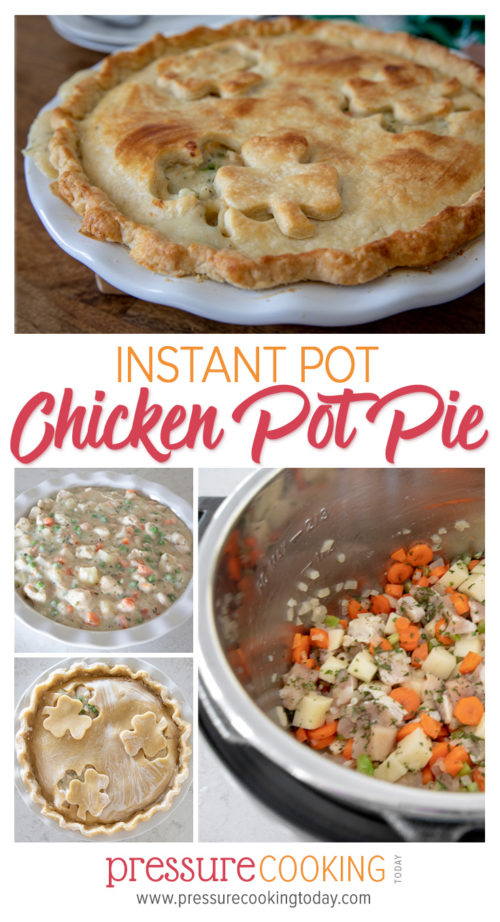