This New York cheesecake recipe was sent to me from one of my wonderful readers. Jerry said it is a fantastic cheesecake, and his friends and family love it. Since I love making cheesecake in the pressure cooker, I was happy to give his recipe a try, and even happier that he said I could share the recipe with you.

An Instant Pot is one of the most popular brands of electric pressure cookers. They are easy to use and your Instant Pot can help you create this New York Cheesecake with a Toffee Pecan Shortbread Cookie Crust!

I pulsed the cookies and pecans together in my little food processor. Then I put the crumbs and the melted butter in a Ziploc bag and just tossed them until they were blended. I think that’s easier than mixing them in a bowl. 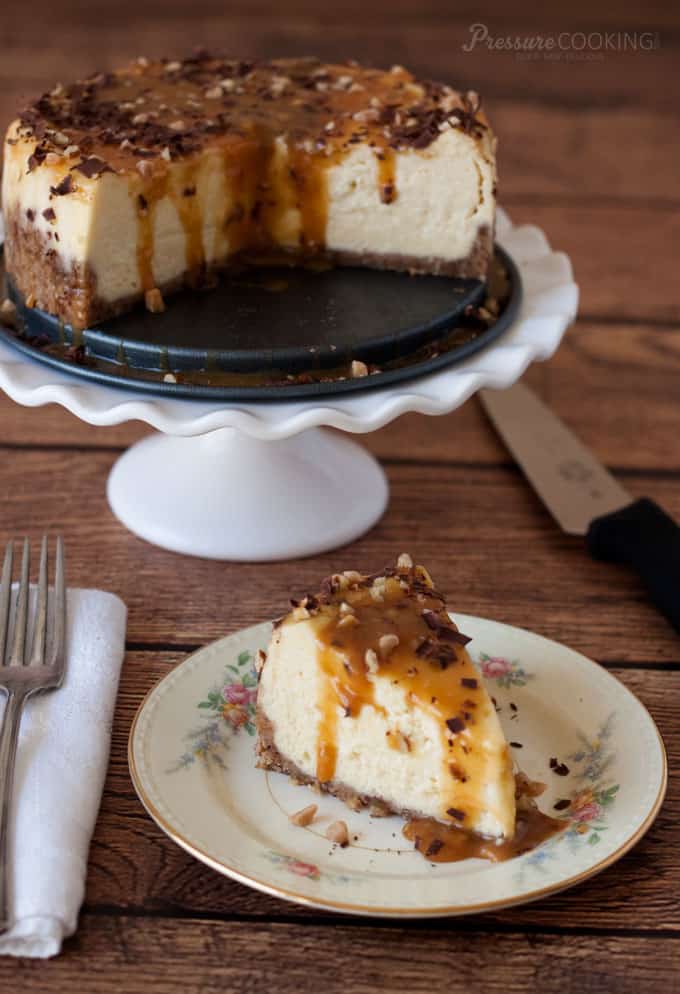 Despite those few changes, I was super impressed with this cheesecake. I like a rich, dense New York style cheesecake, and this one made quickly in the pressure cooker in a cute little 7-inch size is fabulous! Thanks for sharing the recipe Jerry!

Before you get started making the New York cheesecake recipe, be sure and read my Making Perfect Pressure Cooker Cheesecake posts for additional tips.

Prepare a 7 inch springform pan by greasing it or coating it with a non-stick spray.

In a bowl combine the cookie crumbs, chopped pecans and butter. Spread evenly in the bottom and up the side of the pan. Place in the freezer for 10 minutes.

In a mixing bowl mix cream cheese and sugar at medium speed until smooth, blend in heavy cream, sour cream, vanilla, and flour. Mix in eggs one at a time just until incorporated; don't over mix. Pour the batter into the prepared crust.

Place a trivet in the bottom of the pressure cooker, add one cup water, and lower your springform pan with a sling* on to the trivet. Lock the lid in place, set pressure cooker to high, and timer to 30 minutes. Allow ten minutes of natural release then perform a quick release.

Let cool one to two hours before placing in the refrigerator for an additional two to three hours, or overnight.

* Using a 18 to 20 inch piece of aluminum foil, folded three times length wise to make a sling to lower and raise your pan.

Update: Jerry shared some tips about covering the cheesecake with foil: I hate getting the water off the cheese cake, so I fold the foil like a tepee and then crimp it around the sides. Works great and the only way of defeating the sticking problem unless you rub a little vegetable on the foil. The teepee is more creative, but either works.

I’ll have to try his tepee suggestion next time. Although, if you do cook it uncovered and a few droplets of water get on the top, an easy way to get the droplets off, is to dip a corner of a paper towel in the drop and let the paper towel soak up the water.