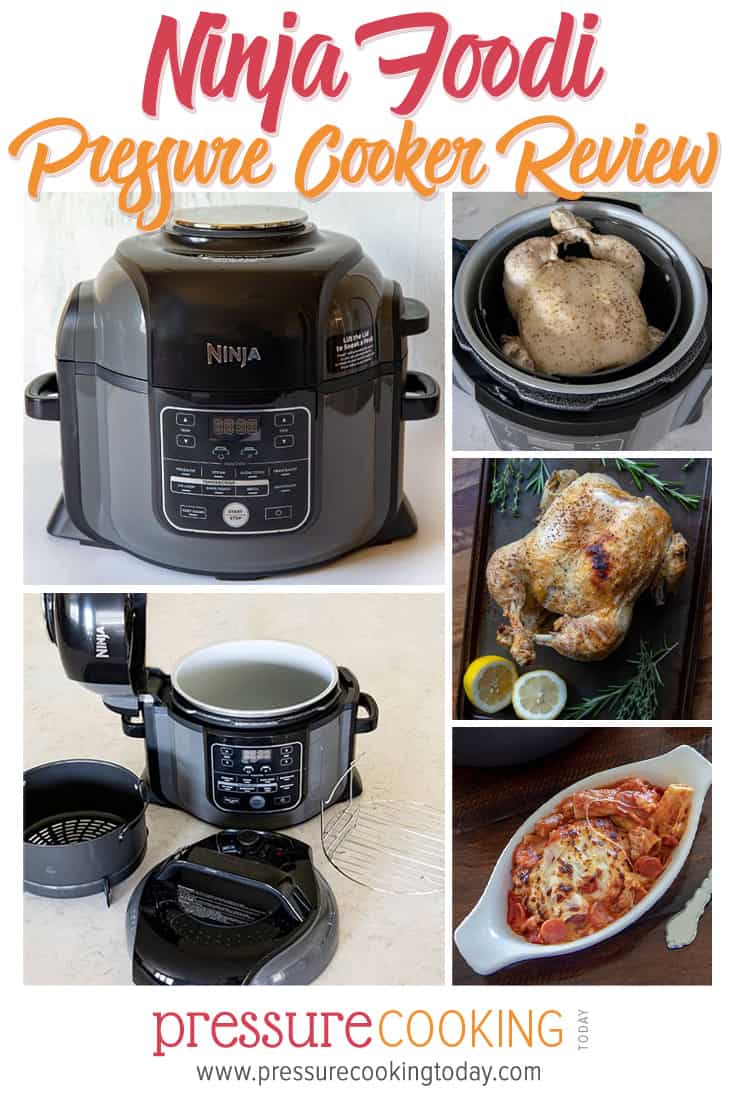 New for 2019, Shark has added an 8-quart Ninja Foodi Deluxe to its pressure cooker / air fryer line-up! Check out my complete Ninja Foodi Reviews to see which one is right for you. 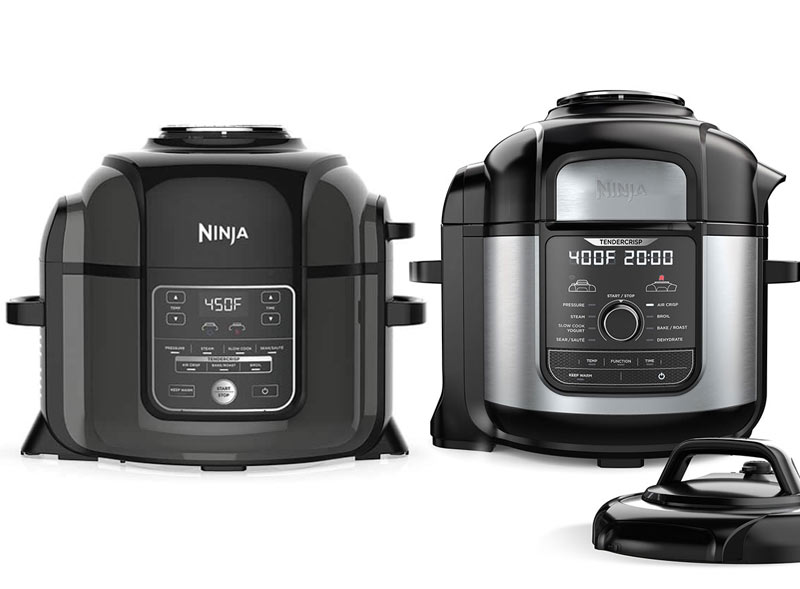 The Ninja Foodi is a pressure cooker and air fryer that can also be used as an oven, steamer, roaster, dehydrator, and slow cooker.

Ninja’s idea is to give you TenderCrisp foods from one appliance. To achieve this, the Ninja has two lids: a detachable pressure cooking lid for tenderness and a non-removable crisping lid. (More on the lids in the reviews below.)

In 2019, Ninja came out with the new Ninja Foodi Deluxe 8-quart. The new Foodi Deluxe has a new stainless steel finish. They’ve completely changed up the user interface to a use center dial and large LCD screen. It also features a larger cooking capacity and a new yogurt button.

Ninja sent me both versions to test drive. Despite the differences in display, many of the features still work the same, so I’ll start the post with my review of the original Ninja Foodi.

However, if you’re looking for something specific, feel free to skip around the post!

The Original Ninja Foodi and the Foodi Deluxe 8-quart are available on Amazon, as well as in stores. Or, you can buy it directly from Ninja. 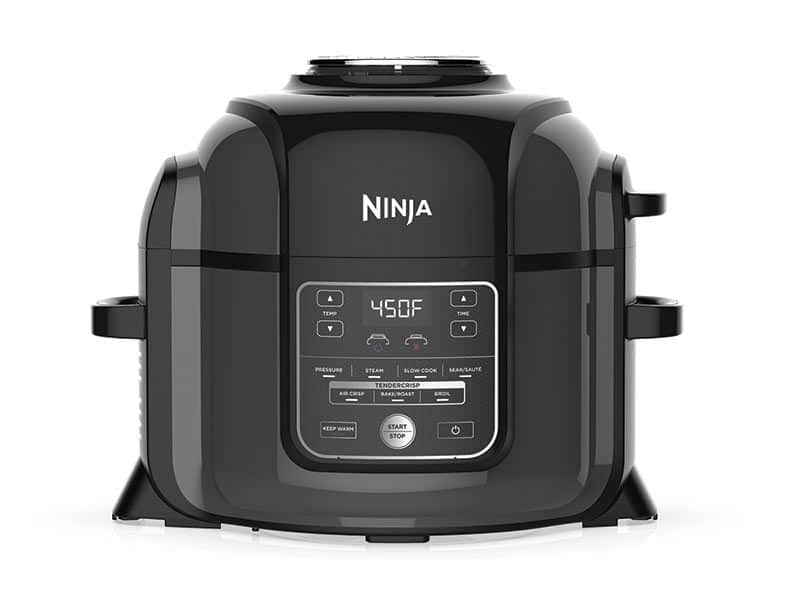 The Ninja Foodi Pressure Cooker is easy to operate. It works similarly to the Instant Pot and other electric pressure cookers. If you’re looking for Ninja Foodi Recipes, all of the pressure cooking recipes in my cookbook and on my site work in the Foodi. 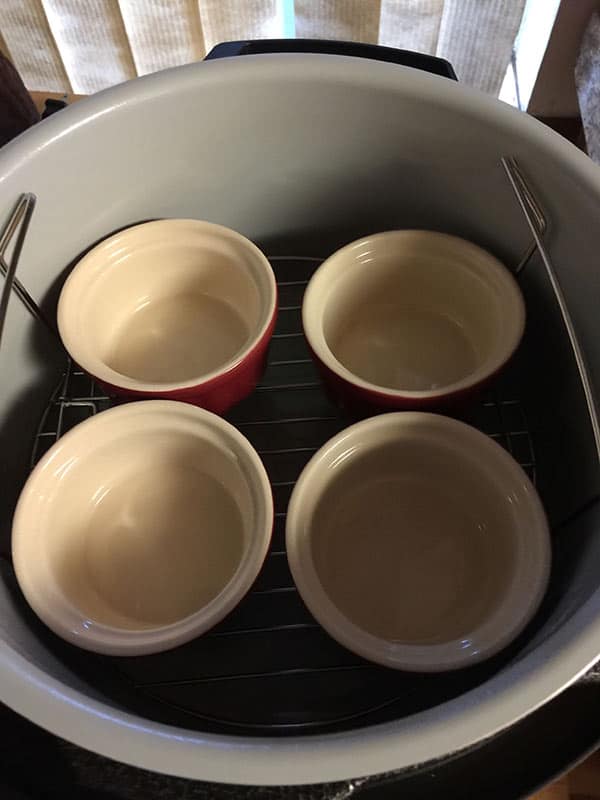 What You Need to Know Before Buying 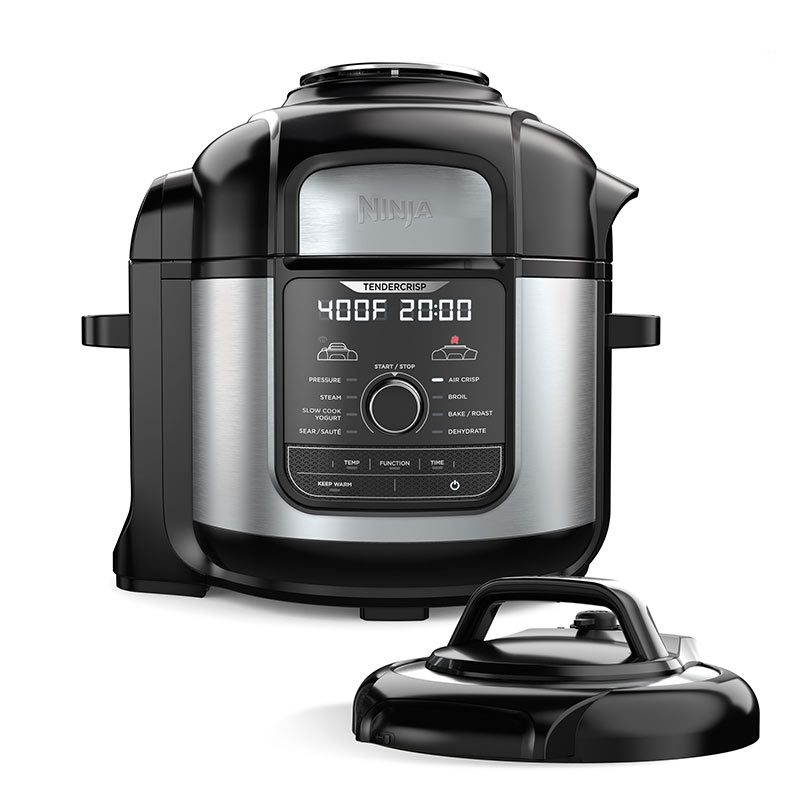 Currently, the Ninja Foodi deluxe is only available in an 8-quart size. Like the original, the Foodi Deluxe is easy to operate. The pressure cooking function is similar to the Instant Pot and other electric pressure cookers.

If you’re looking for Ninja Foodi Recipes, all of the pressure cooking recipes in my cookbook and on my site work in the Foodi.

What You’ll Love about the Ninja Deluxe

The stainless steel exterior is pretty and looks more sleek and sophisticated. The enhanced user interface features a large center dial that makes setting the time and temperature easier. 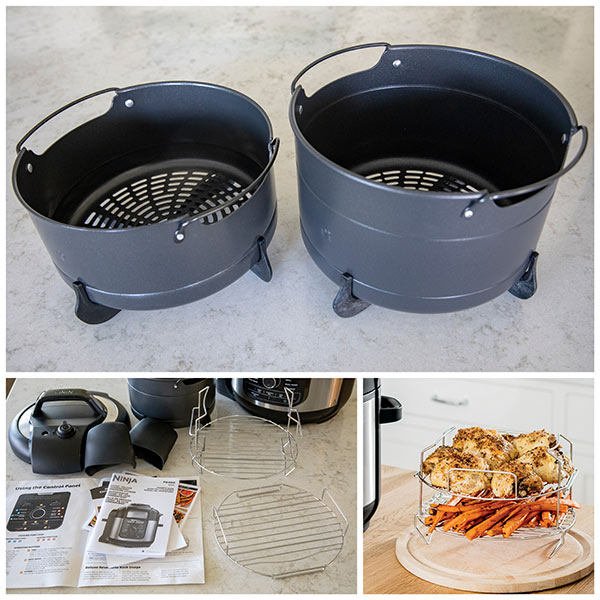 You can see in the picture below how much bigger the Deluxe basket is compared to the one that came with the original 6.5-quart Ninja Foodi.

Ninja added a yogurt function to the Ninja Foodi Deluxe. (My Instant Pot Yogurt recipe will work well in the Foodi Deluxe.)

The two-piece rack is reversible and stackable so you can accommodate more food when steaming, broiling or air frying.

The Ninja Deluxe Pressure Cooker has a black sealing ring, which helps it stand out from other pressure cooker rings. (This is especially useful if you have more than one brand.)

The beeping sounds are louder on the new Deluxe. 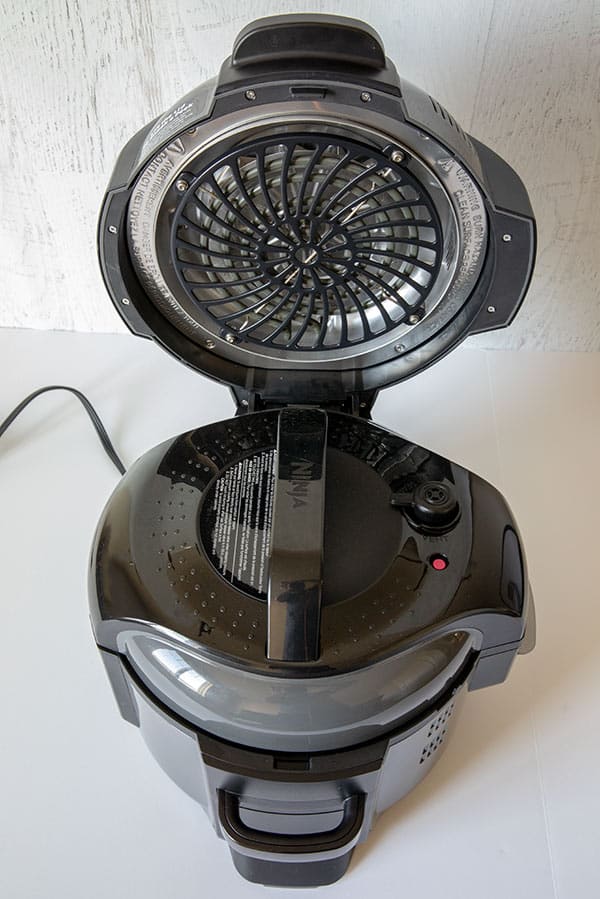 What You’ll Need to Know Before Buying

The Ninja Foodi Deluxe is still quite heavy, weighing in at 26 pounds. Since the crisping lid still isn’t removable, you’ll have to lift that weight each time you move or clean it. The non-removable lid also makes it difficult to fit under cupboards.

The bigger LCD screen is nice. It says [Pre] when the pressure cooker is coming to pressure which is great, so you know what’s going on in the pot.

However, it has three columns of flashing lights that do not correspond to the progress coming to pressure. I would have preferred a progress bar like some of the new electric pressure cookers have.

Time Counts in Minutes and Seconds

Another thing to be aware of when pressure cooking, the display counts down in minutes and seconds, not hours and minutes like the Instant Pot and many other pressure cookers. 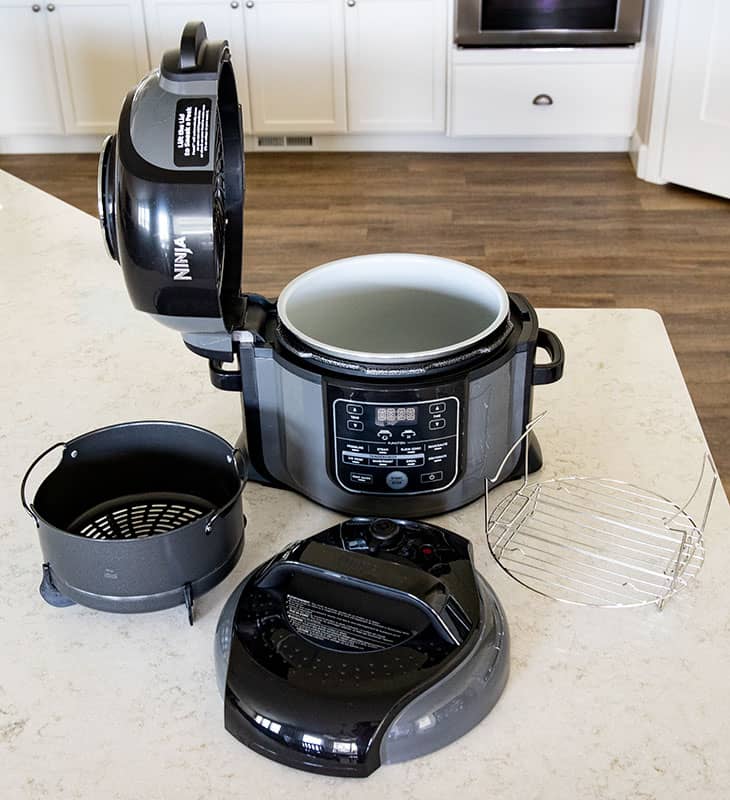 When I received the first Foodi, I’d never used an air fryer before, so I also sent a Foodi to my good friend and one of the moderators of my Pressure Cooker Facebook Group, Genene, to test. Genene loves cooking with her electric pressure cookers and she has a couple of air fryers that she uses on a regular basis in conjunction with her pressure cookers, so I knew she’d be able to tell me how the Foodi stacks up.

The pressure cooking lid is a separate, detachable lid, so you’ll need room in your pantry or kitchen to store it.

The first thing I cooked in my Foodi was a roast chicken. I used the recipe that was in the recipe book that is included with the Foodi. The recipe called for a 4 to 5 pound chicken. The smallest chicken my store had was 5.5 lbs. It was a little bit too tall for the Foodi, but it fit in the crisping basket fine.

The chicken was a little too close to the top and there were lines on the chicken leg where it touched the crisping lid. 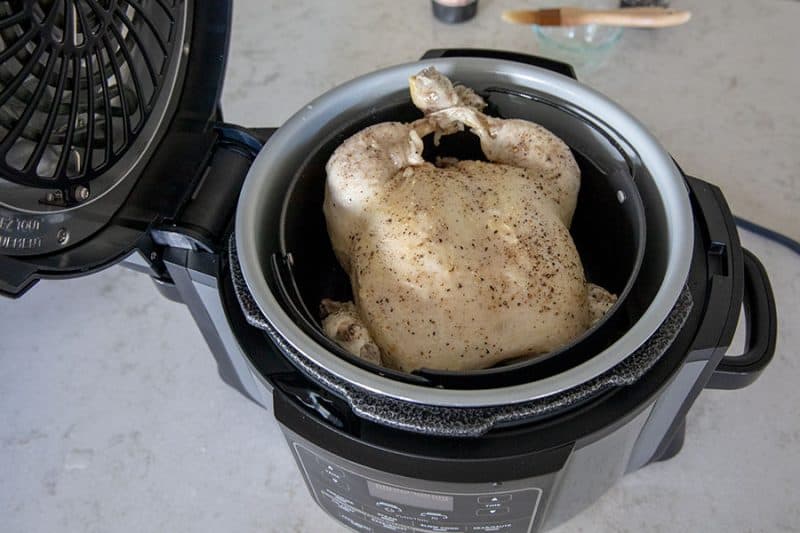 The recipe called for cooking it in the Cook and Crisp Basket. It’s great that the basket is included with the Foodi. The holes in the bottom of the basket make it great for pressure steaming food, as well as crisping up food using the crisping lid. My only complaint about the basket is that the legs have lots of crevices that are difficult to clean.

The Herb-Roasted Chicken recipe has you add lemon juice, hot water, honey, peppercorns, kosher salt, fresh thyme, and garlic to the pressure cooking pot. I found the flavorful ingredients in the bottom of the pot didn’t really infuse the chicken with flavor. I added some fresh rosemary to the recipe and my husband said he could taste the rosemary a little, but I couldn’t really taste the lemon, thyme or honey.

If I made the recipe again, I would probably make a compound butter and put it under the skin rather than rely on the pressure cooking liquid to flavor the chicken. 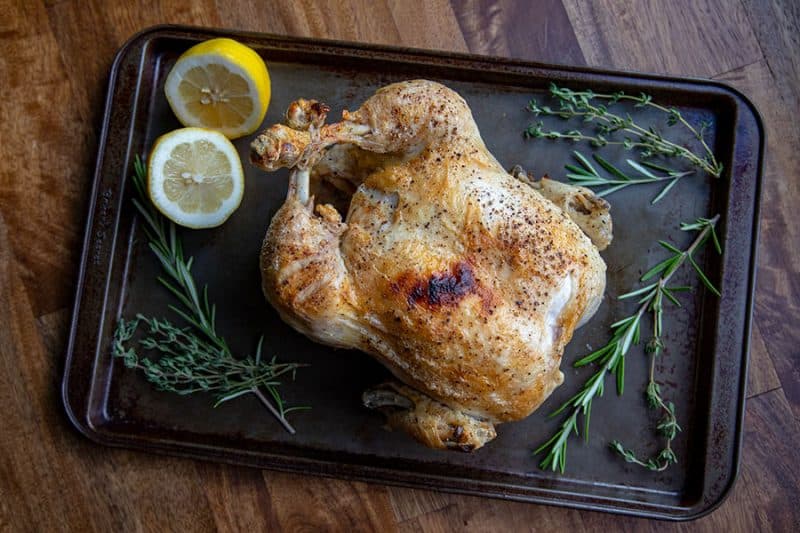 My chicken wasn’t as tender as I’d like, so I probably should have increased the pressure cook time more than 2 extra minutes. 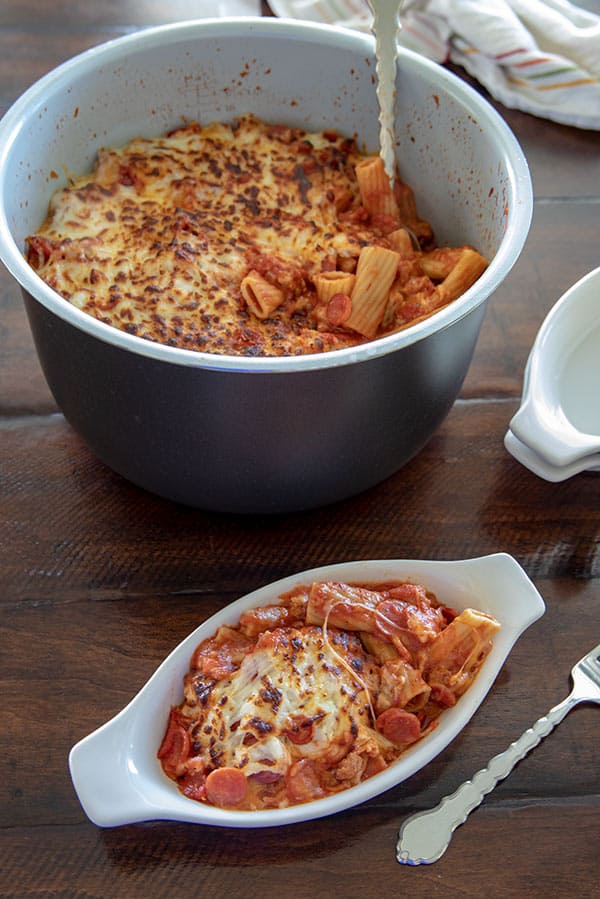 After pressure cooking the noodles and sauce for 6 minutes, you top it with cheese and pepperoni. Then you use the air fryer lid to melt and brown the cheese. The cheese browned a little more than I usually like. However, I liked that you can lift up the air fryer lid any time while it’s cooking. The blower pauses while the lid is raised and you can check and see if you want more or less browning.

While it was great to be able to melt and brown the cheese in the same pot, the disadvantage is that you don’t have as much surface area as you would in a 9×13 pan to spread the cheese out over the pasta. Also, it makes a big pot of pasta. I had a leftovers that I store in the pressure cooking pot in the fridge, so the inner pot wasn’t available to cook something the next day without transferring it to another dish.

Get my version of the Ninja Foodi Pressure Cooker Pepperoni Pizza Pasta recipe.

Testing Out Other Foods in the Ninja Foodi

The first recipe Genene made was the Baked Macaroni & Cheese recipe from the Foodi cookbook. Genene said it seemed like a lot of liquid prior to the Air Crisp time of 7 minutes. But it’s the perfect amount of liquid after air frying; the noodles absorb the liquid as the topping browns. 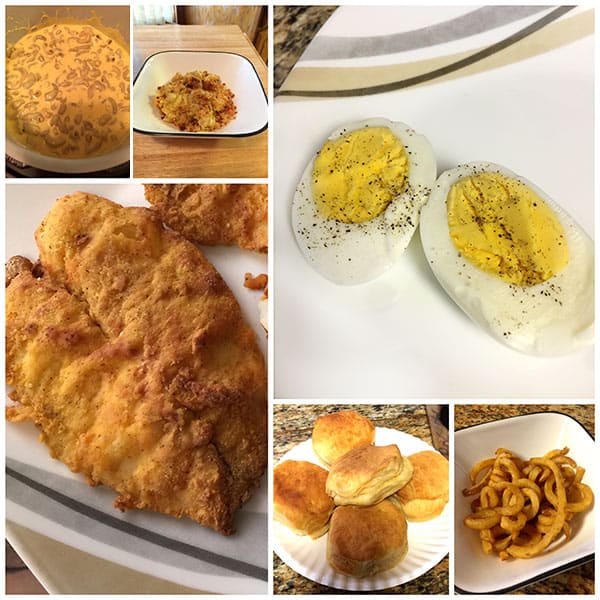 An interesting twist on this mac and cheese recipe is you start it with lemon juice and baking soda, cook it for 0 minutes and let the noodles finish cooking during a 10 minute natural release. The noodles were softer than Genene likes, so the next time she would reduce the natural release time to 8 minutes. Both she and her husband enjoyed the mac and cheese recipe.

Genene also baked biscuits, Louisiana Battered Flounder, and Frozen Curly Fries using the crisping lid; all crisped up beautifully. She tested the pressure cooker by making hard boiled eggs, and the timing for hard boiled eggs was exactly the same as in her Instant Pot.

However, despite these benefits, if you have a small kitchen, the Ninja Foodi is probably not right for you. 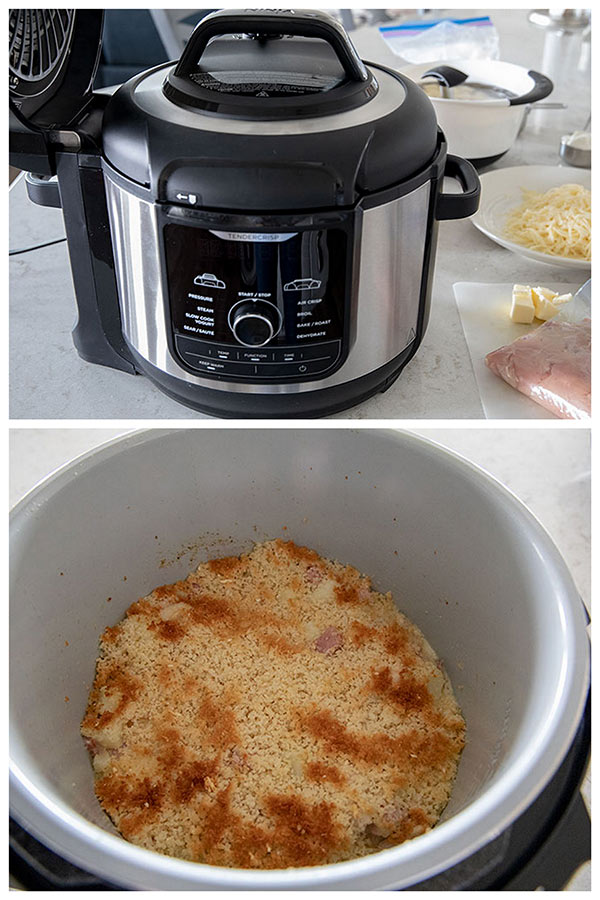 On the other hand, if you have the space and have been considering buying a pressure cooker and an air fryer, you’ll be pleased with the quality of the Foodi. It is nice having one appliance that does both. The picture shown above is the Chicken Cordon Bleu Bake from my cookbook. I love being able to pressure cook the meal and then finish it off with a golden brown, crunchy topping without dirtying another pan or turning on the oven.

The Foodi Deluxe with its increased capacity and easier to use dial is a great option if you’re cooking for a larger family.

All of my pressure cooking recipes will work well in the Foodi. Start with these Easy Pressure Cooker Recipes. My Getting Started post has great information about using a pressure cooker. You’ll also want some cookbooks and accessories to have even more fun with your new Foodi.

Disclosure: I was sent a Ninja Foodi and Ninja Foodi Deluxe to review, but all opinions expressed are always my own. 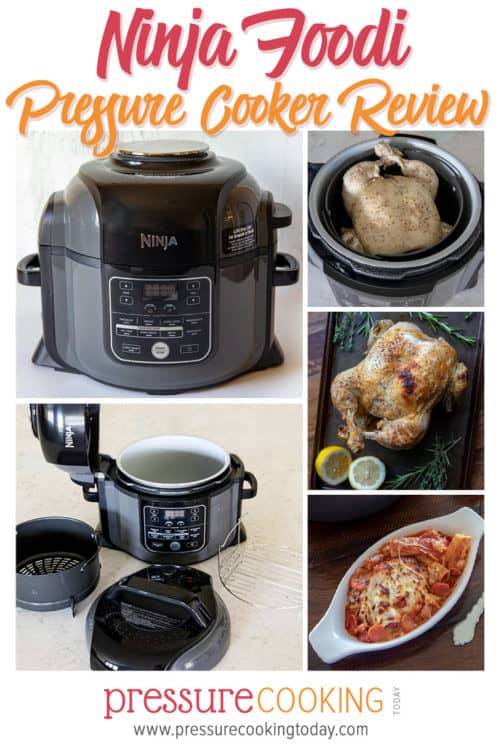