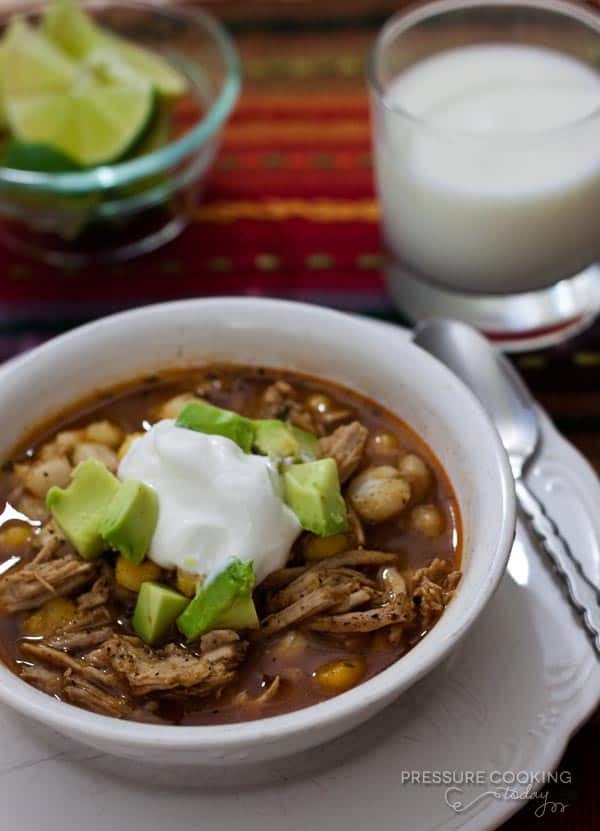 Pork shoulder cooked in a spicy broth until it’s fork tender, then it’s shredded and combine with hominy to make a hearty stew. If you haven’t tried hominy yet, give it a try. It’s delicious and a good source of fiber. Hominy is just dried kernels of corn that have been soaked in lime or lye until the kernels are soft and swollen, and slightly chewy.

Today I’m sharing a recipe that I adapted from a recipe in the October edition of Martha Stewart Living. In the Everyday Foods insert they’re featuring simple slow cooker meals, and I knew their Pork Hominy Stew (Posole) slow cooker recipe would make a terrific pressure cooker recipe. 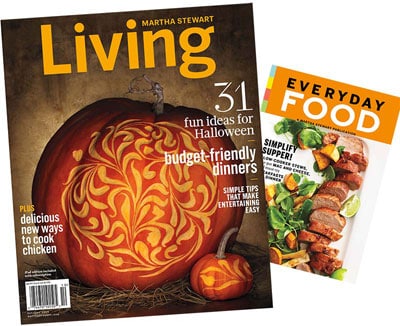 Making Pork and Hominy Stew (Posole) in an Instant Pot

An Instant Pot is one of the most popular brands of electric pressure cookers. They are easy to use and your Instant Pot can help you create this delicious Pork and Hominy Stew (Posole)! 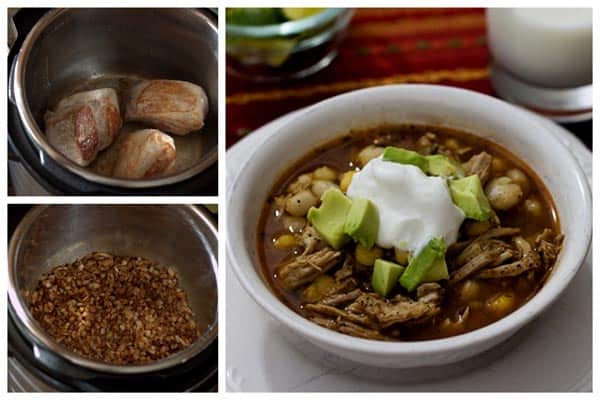 I had a large can of white hominy and a large can of yellow hominy in the pantry, so I doubled the hominy which help to really bulk up the recipe as well as add a fun color variation. My husband said if it was called stew, the broth needed to be thicker, so I added a corn starch slurry to the broth at the end of the cooking time. 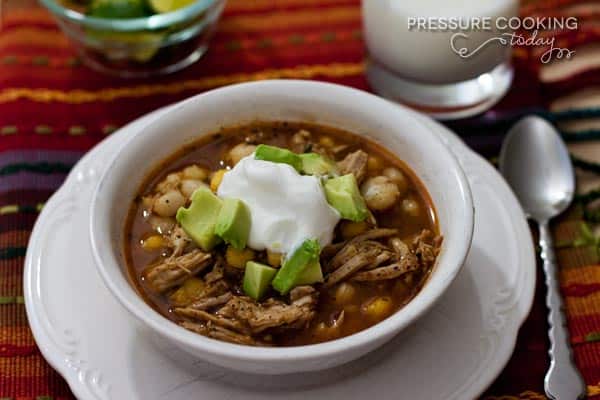 You can find hominy in the hispanic section of the grocery store, but if you can’t find hominy, you could easily swap in white or kidney beans.

I served my stew with lime, sour cream and avocados. Shredded cheese and chips would be great additions as well.

Select Browning and add 1 tablespoon oil to the cooking pot. Season pork with salt. Add the pork to the hot oil in the pressure cooking pot, and cook until pieces are browned on all sides. When browned, remove to a large bowl.

Add 1 tablespoon oil to the cooking pot. When hot, add the onion, garlic, and chili powder and sauté until soft, 4 minutes. Add 2 cups broth and cook, stirring and scraping up browned bits with a wooden spoon.

Add remaining 2 cups broth and pork to cooking pot, Lock lid in place, select High Pressure and 30 minutes cooking time. When beep sounds, turn off pressure cooker and use a natural pressure release for 10 minutes, then do a quick pressure release to release any remaining pressure. When valve drops carefully remove lid.

Whisk together corn starch and cold water; add to broth in cooking pot. Select Saute and stir until broth thickens. Stir in shredded pork and hominy. Season to taste with salt. Serve with avocado and lime.

Tip: Squeeze a bit of lime juice directly onto avocados after chopping to prevent browning.