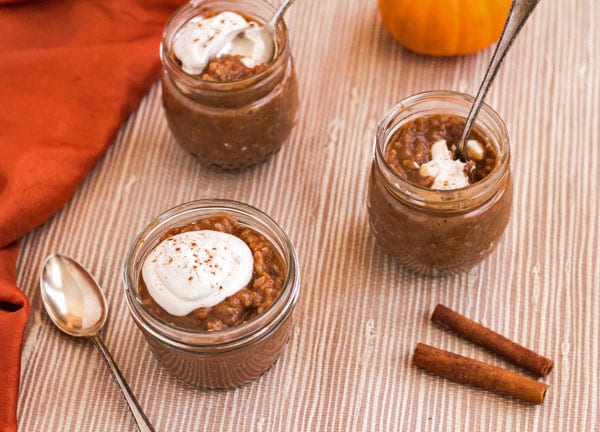 Hi there. I’m Letty from Letty’s Kitchen, the blog about seasonal vegetarian cooking and desserts with a healthier twist. I’m delighted to share this pressure cooker recipe with you, especially because easy-to-make healthy desserts are always my goal.

An Instant Pot is one of the most popular brands of electric pressure cookers. They are easy to use and your Instant Pot can help you create this Pumpkin Date Brown Rice Pudding recipe!

In testing this recipe, I tried 3 varieties of brown rice, and each lent a different chewiness to the pudding. I thought Lundberg’s Golden Rose medium grain gave the best texture, with their short grain brown rice coming in second. Just like with white rice, shorter grains make the best rice pudding. (see note)

For the softest brown rice kernel, it helps to soak the rice in boiling water first, at least 10 minutes, and up to an hour. Rinse and drain before adding to the milk and dates in the pressure cooker. Pumpkin puree and its classic spices complement the tender-to-the-tooth texture—you stir them in after releasing the pressure. 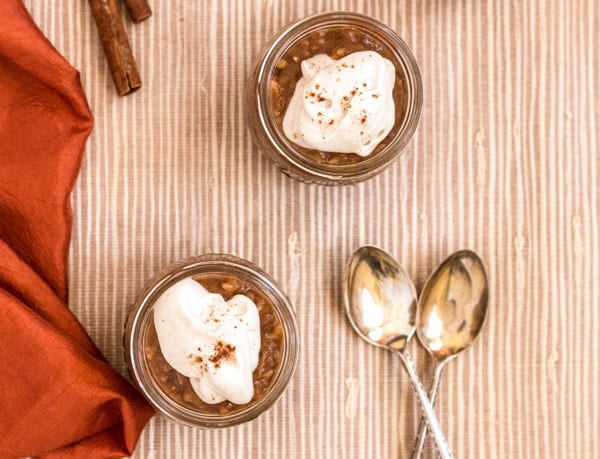 Serve your pumpkin date brown rice pudding with a dollop of cream and a sprinkle of pumpkin spice. Warm, room temperature, or chilled, this is a winning dessert, especially this pumpkin-y time of year.

Cover the rice with boiling water and let sit 10 minutes or up to an hour more . Rinse.

Bring the milk and water to a boil in a pressure cooker pot. Add the soaked rice, dates, cinnamon stick, and salt. Lock the lid in place and bring to high pressure for 20 minutes. Use a natural pressure release.

When the pressure has released, stir in the pumpkin puree, maple syrup, and pumpkin spice mix. Cook, stirring constantly for 3 to 5 minutes, to thicken the pudding and cook out the raw pumpkin flavor. Remove from the heat and discard the cinnamon stick. Stir in the vanilla.

Transfer to a bowl and cover the surface with plastic wrap, so it touches the hot pudding, to prevent a skin from forming, and so the steam from the hot pudding doesn’t condense and create water on the surface. Let cool about 30 minutes. The pudding will thicken as it cools.