Pressure Cooker Raspberry Orange Bread Pudding is a citrus twist on an old-fashioned favorite. This recipe will work in any brand of electric pressure cooker, including the Instant Pot, Ninja Foodi, and Mealthy MultiPot. 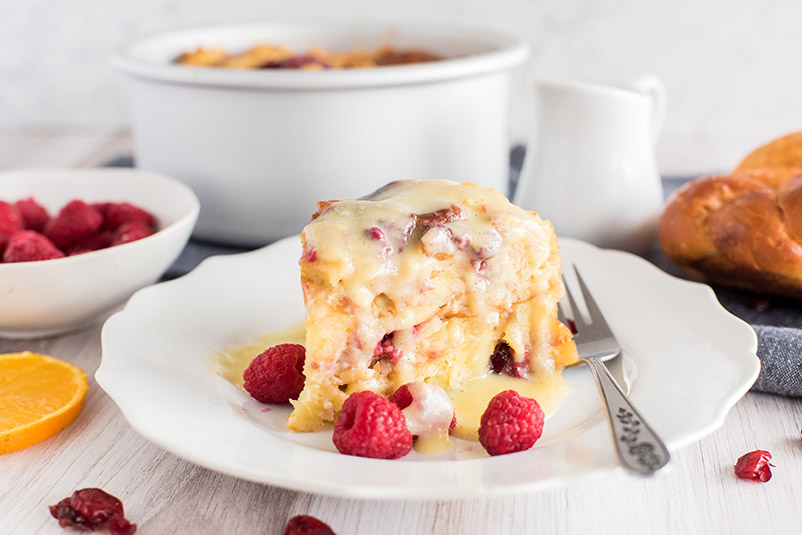 Jenn here, with a sweet recipe for you to start the month! This pressure cooker raspberry orange bread pudding is a soft, sweet dessert that my family loves.

Orange and raspberry is one of my favorite flavor combinations—it’s bright and fresh and perfect for raspberry season. Serve those flavors in a creamy, custardy bread pudding, and it’s a must-have dessert! (Or even breakfast if you’re feeling sweet!) 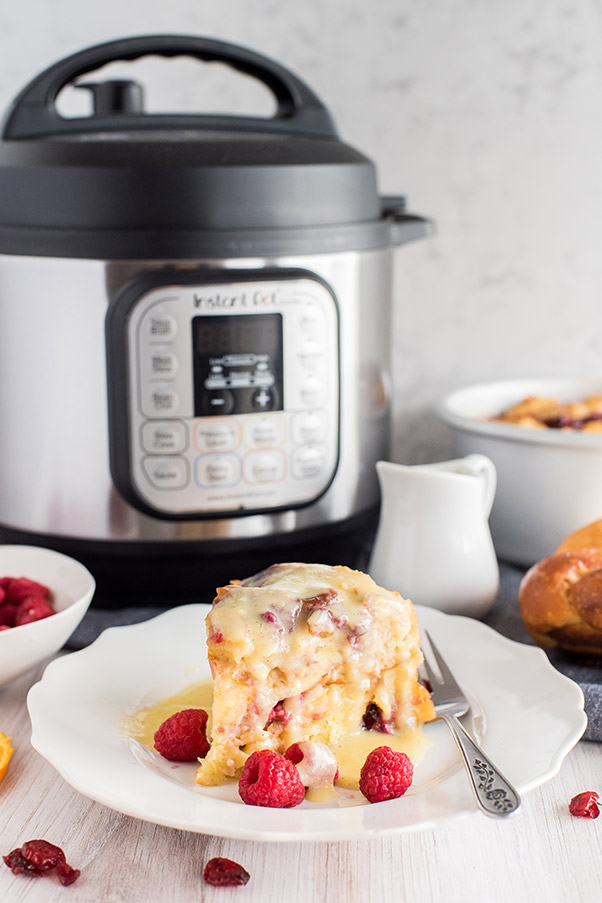 What Is Bread Pudding?

First, let’s talk about bread pudding. I was nervous to try bread pudding for the first time because, let’s be honest, a pudding made from stale bread and milk just sounds…different. So I just never tried it.

Don’t be like me. When cooked right, bread pudding is an AMAZING, old-fashioned dish.

Bread puddings are typically made with cubed bread, milk, eggs, and oil or butter. This recipe is similar, but I use heavy cream because I love the added creamy texture you get. 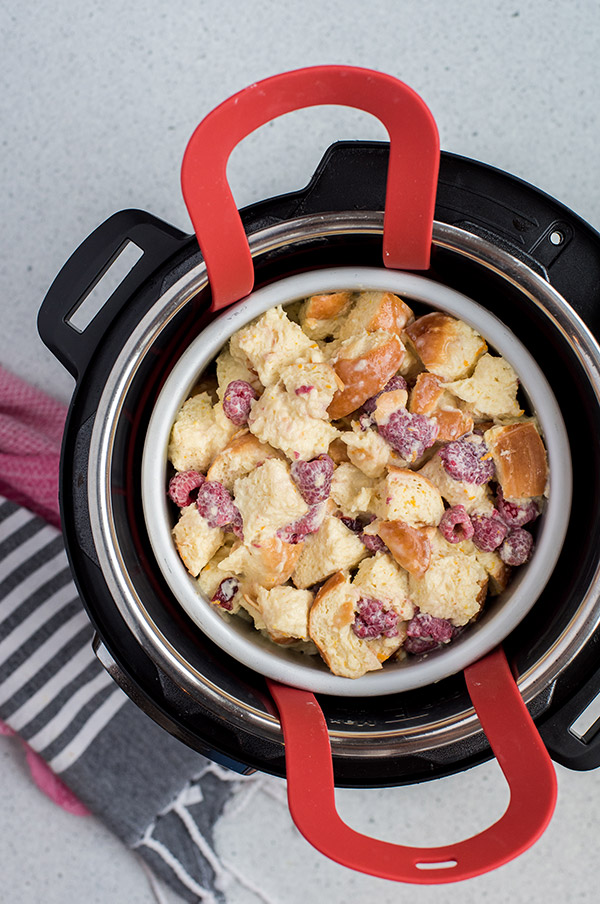 Bread pudding is well-suited for the steamy environment inside the electric pressure cooker. Because there’s minimal moisture loss in the pressure cooker, you can skip the overnight soak in the cream mixture that many recipes call for. 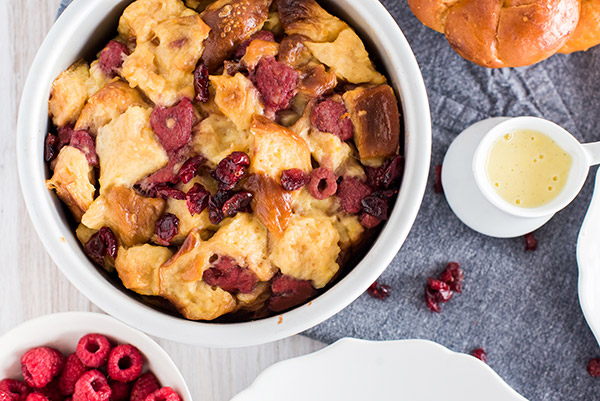 What Kind of Bread to Use for Bread Pudding?

While you *can* use any type of bread in bread pudding, you’ll get better results with a sweet, flavorful bread with a solid crumb structure.

This bread pudding recipe calls for challah bread. Challah is a rich, eggy bread that soaks up the milk-and-egg mixture yet is still able to hold its shape.

Challah bread is available at most grocery stores. My local grocery store offers it in sugar-topped or plain varieties.

Brioche is another great option for bread pudding. Challah is kosher and does not contain dairy, while brioche is French and is made with butter and milk. Both are rich and flavorful and are great choices in this bread pudding.

However, if you don’t have time to run to the store for a specialty loaf, you can get great results by using a mixture of half croissants and half regular bread. Ideally, you’ll let the bread sit out overnight so it gets a little stale. (The staleness helps it absorb more of the milk-and-egg mixture without sacrificing its structure.) However, if you don’t have time, you can skip this step. 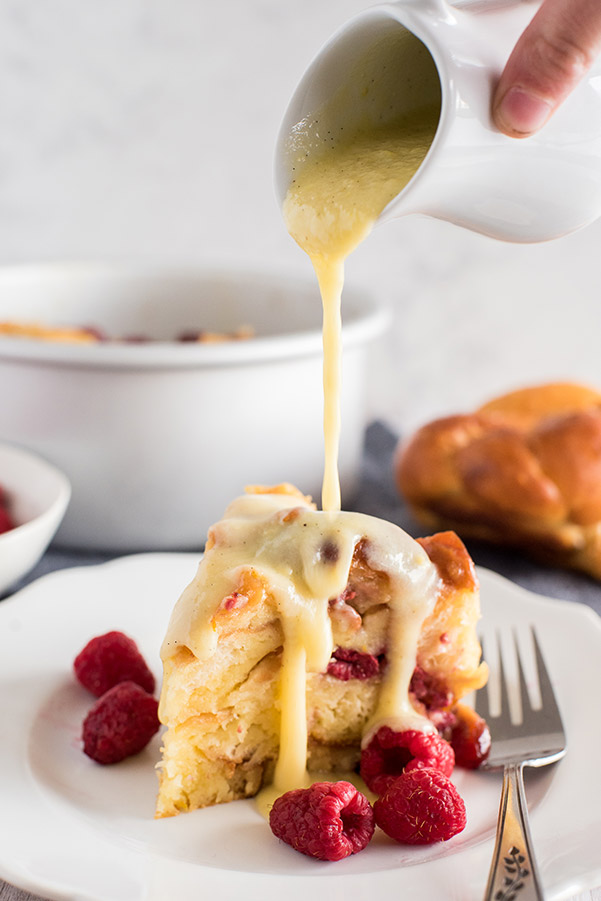 What Is Creme Anglaise?

Creme anglaise is a creamy vanilla custard sauce. Despite its fancy French name, it’s a simple sauce that’s easy to make and SO delicious.

(Side note: Creme Anglaise is the one recipe that appears in every cookbook Barbara has ever written. Page 84 of Dream Puffs, page 294 of The Electric Pressure Cooker Cookbook, and page 143 of Instantly Sweet. It’s even on page 169 of The Instant Pot Baby Food & Toddler Food Cookbook. It’s a good one, everybody!)

If you’ve never had creme anglaise, you really need to give it a try.

However, you can substitute whipping cream for the creme anglaise. Or you can omit it entirely—the bread pudding has a great flavor even without the topping. 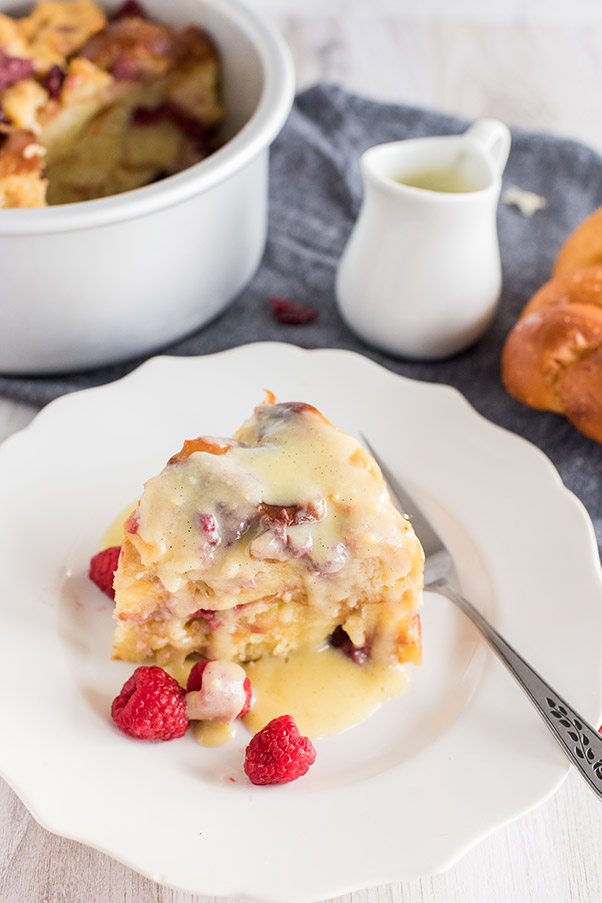 Your bread pudding is done when it is creamy but not soggy. My favorite description is that a done bread pudding has “a center that jiggles but doesn’t wiggle.” But I’d rather take the guesswork out and test it—take it out when the internal temperature has reached 160°F. 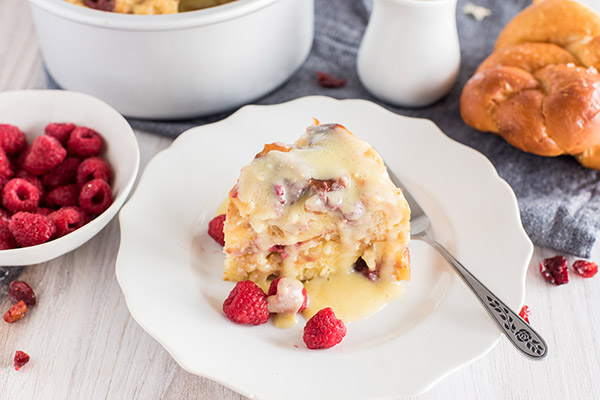 Sometimes we’re crunched for time and need dessert done quickly. It’s easy to do with this bread pudding!

Prepare the recipe as directed, and allow the bread pudding to cool completely in the pan. Place in the fridge until ready to serve.

Slice the bread pudding in the pan, then transfer the desired number of slices to a baking sheet.

You can make the creme anglaise in advance; however, it comes together so quick, I just make it on the stovetop while the bread pudding is warming in the oven.

Have you tried bread pudding? What is your favorite pressure cooker dessert? Let me know in the comments!

Optional: If desired, you can brown up the top under a broiler just prior to serving.

Your pressure cooker is capable of making so much more than cheesecake! Try some of these the next time your sweet tooth calls: 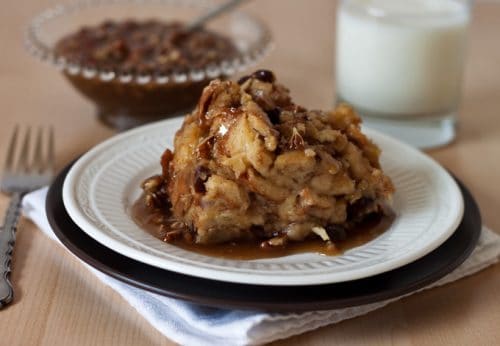 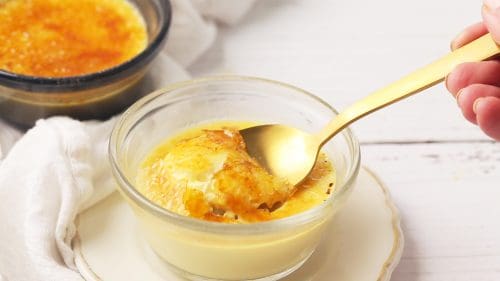 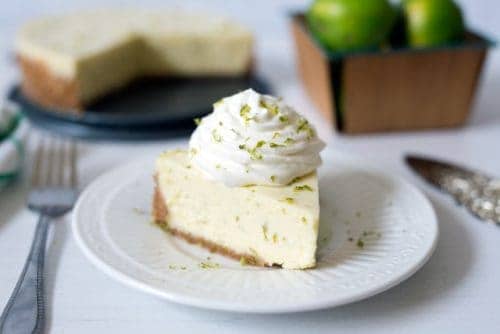 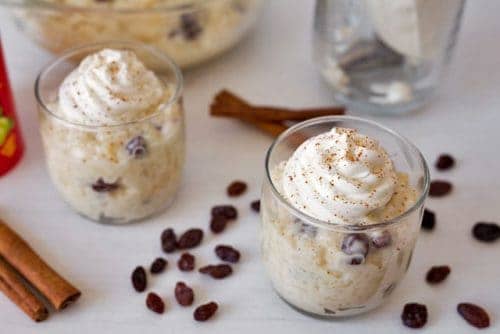 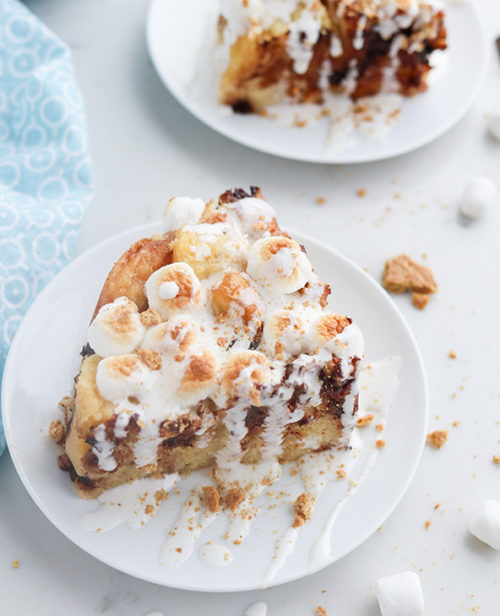 Instantly Sweet also has recipes for Lemon Blueberry Bread Pudding and Smores Bread Pudding, along with 73 other amazing sweets you can make in any brand of electric pressure cooker.