Last time I posted a spaghetti squash recipe a reader suggested cooking the spaghetti squash whole. Then after it’s cooked, it’s easier to cut the squash in half and scrap out the seeds. I used that technique this time and it was so much easier.You do need to cook the squash a couple of minutes longer though. 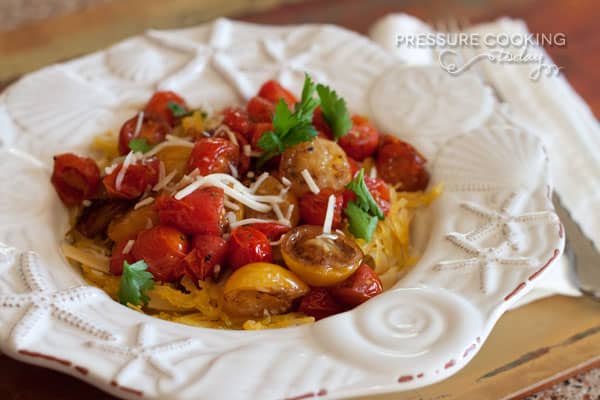 I topped the spaghetti squash with roasted balsamic cherry tomatoes. I used red and yellow tomatoes because the yellow ones looked so tasty at the market, but feel free to use whatever you like.

Some of my family don’t love spaghetti squash even though it has a very mild taste. So for them, this time I mixed the spaghetti squash with a little pasta. If you look closely at the picture, you can see a little linguine peeking out. Angel hair pasta would have been my first choice, but I didn’t have it in the pantry. My daughter liked it better mixed with the pasta, and said she couldn’t really taste the spaghetti squash served this way. Either way, it’s a great way not only to cut calories, but also boost the nutrition of your meal.

Making Spaghetti Squash with Roasted Tomatoes in an Instant Pot

An Instant Pot is one of the most popular brands of electric pressure cookers. They are easy to use and your Instant Pot can help you create this delicious Spaghetti Squash with Roasted Tomatoes!
Continue to Content

When cool enough to handle, halve squash crosswise. Scoop out seeds; discard. Use a fork to scrap the strands of “spaghetti” from the skin of the spaghetti squash.

Prepare roasted cherry tomatoes: Slice the tomatoes in half, and put them in a strainer. Sprinkle the salt over the tomatoes, gently stir. Place the strainer over a bowl and let sit for 15 minutes.

Discard cooking water from pressure cooking pot and dry pot. Select Saute and add 1 tablespoon oil to pressure cooking pot. Add garlic; cook until fragrant and just starting to color, about 3 minutes. Add squash (discard any liquid that may have accumulated on the plate). Cook, stirring frequently, until squash is hot, about 5 minutes; season with salt and pepper.

Broil on the center rack for 6 to 8 minutes, or until the tomatoes begin to brown and soften. Remove from oven.