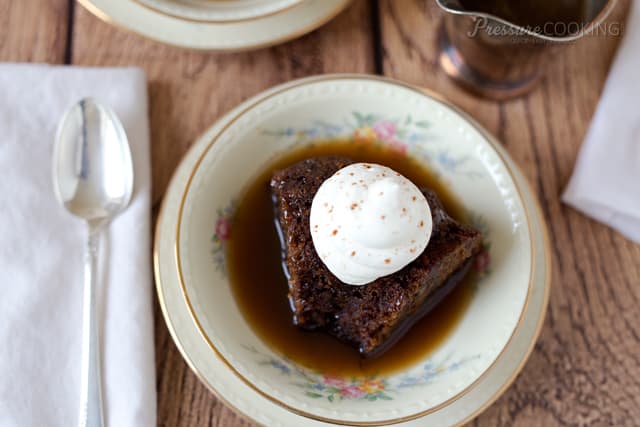 This is my Grandmother Hales’ recipe. My step-mom got the recipe from my grandmother and started making it because my dad loved it. My sister has fond memories of my step-mother serving this cake, and asked me if I could convert it to a pressure cooker recipe.

I was a picky little eater when I was young and I don’t remember eating this pudding/cake as a little girl. My guess is I saw there were carrots in it and wouldn’t even give a try. 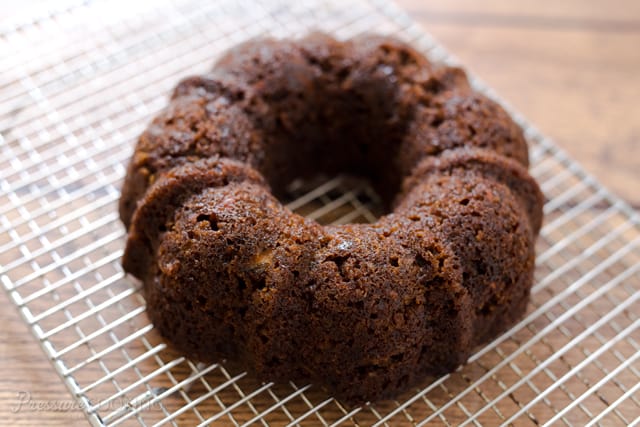 The original recipe included suet as an ingredient. Suet is very traditional in British steamed puddings, but not a common ingredient in American supermarkets. Although you can get suet from the butcher, it’s generally something you have to pre-order and I decided not to use it in this recipe.

Several sites online suggested substituting frozen grated shortening for suet in recipes. So I changed the recipe to use all shortening instead of shortening and suet.

The original recipe called for walnuts, but I’m not a walnut lover, so I substituted pecans. Feel free to use whichever one you’d prefer. 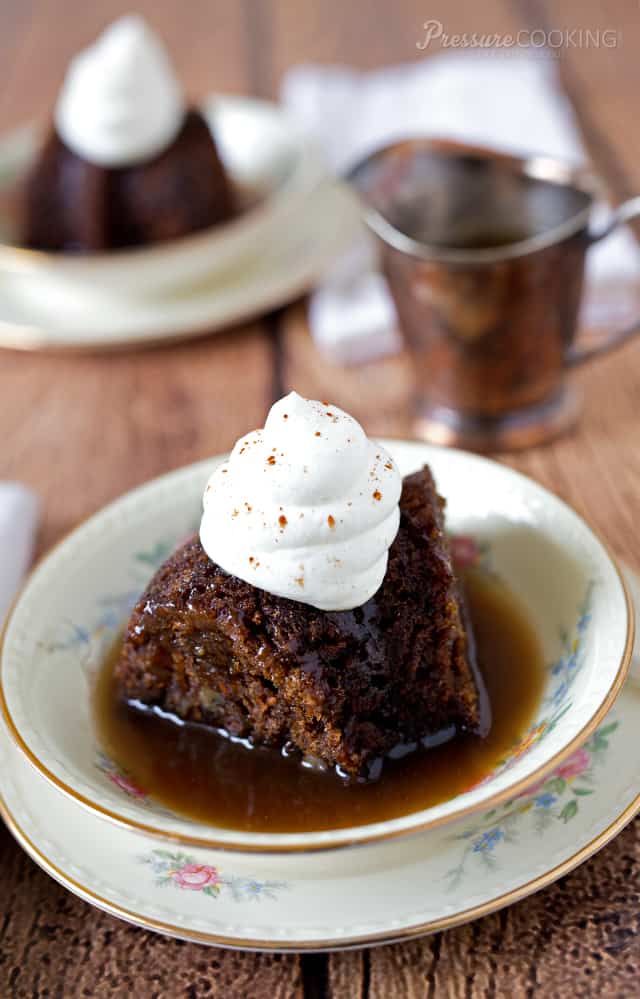 An Instant Pot is one of the most popular brands of electric pressure cookers. They are easy to use and your Instant Pot can help you create these delicious Steamed Carrot Pudding Cake!

My grandma and step mom often steamed the pudding in a coffee can. I decided to use my half size, 6 cup Bundt Pan so it would be in a pretty shape. The bundt pan shape also helps cook from the inside out too.

They usually served the pudding with a rum or lemon sauce. On my recent trip to the Caribbean island of Tortola, our hotel, left a welcome bottle of rum in our room. I decided to bring the rum home, and made a luscious buttery spiced rum sauce to serve with the pudding.

I think my sister is going to love this quick pressure cooker version of this old fashioned carrot pudding.

In a large mixing bowl, whisk together brown sugar, molasses, and eggs. Add flour and spices and stir just until blended. Fold in shortening , carrots, raisins, nuts, and bread crumbs.

Spoon batter into half sized bundt pan sprayed with non-stick spray. Cover with foil and poke a hole in the middle of the tin foil. Prepare a foil sling for lifting the pan out of the pressure cooker by taking an 18” strip of foil and folding it lengthwise twice.

Lock the lid in place. Select High Pressure and set the timer for 60 minutes. When beep sounds, turn off pressure cooker and use a natural pressure release to release the pressure.

Carefully remove the bundt pan to a wire rack to cool uncovered for 10 minutes. After 10 minutes, unmold on a serving platter.

Stir brown sugar and butter in heavy medium saucepan over medium heat until melted and smooth, about 2 minutes. Add cream, rum, and cinnamon and simmer until sauce thickens slightly, about 5 minutes. Serve warm. (Can be prepared 2 days ahead. Cover and refrigerate. Bring to simmer before serving.)