Free up your oven on Thanksgiving Day! This Instant Pot Stuffing is a classic recipe that I’ve been making for decades—updated for the electric pressure cooker. 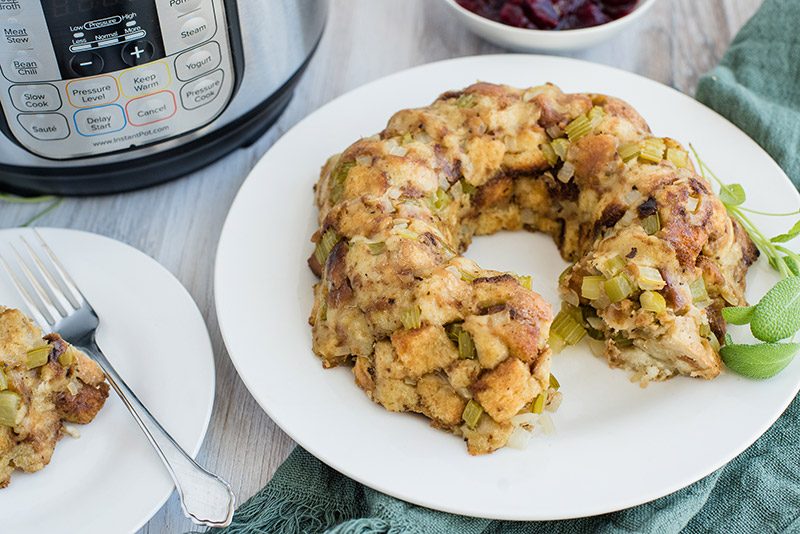 Stuffing is a MUST on Thanksgiving! But it can be really stressful trying to time everything to fit in the oven and be hot on the table at the right time.

Make your life easier by using your pressure cooker this Thanksgiving! You don’t have to worry about the bread stuffing drying out when you cook it in the pressure cooker. And you can crisp it up in your oven in a few minutes while the turkey rests. 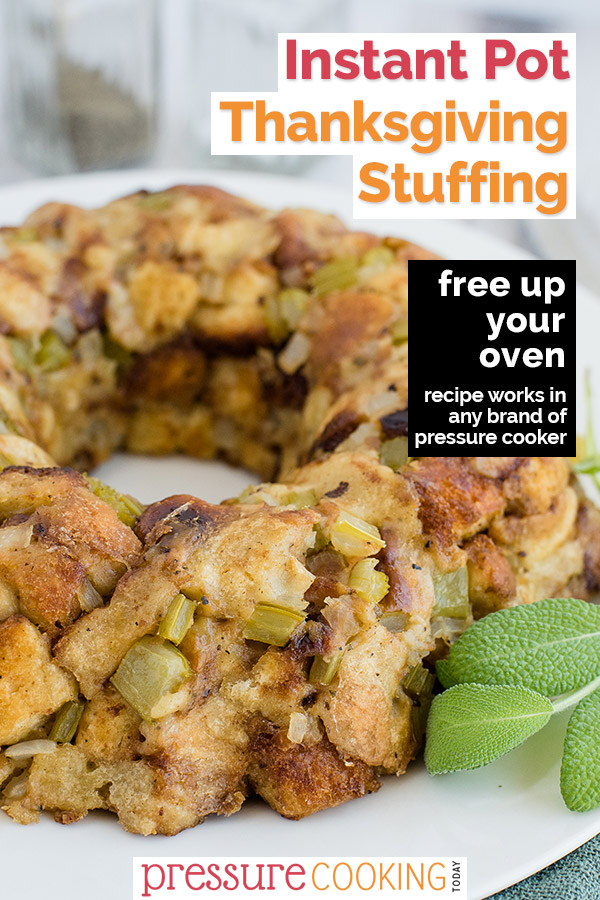 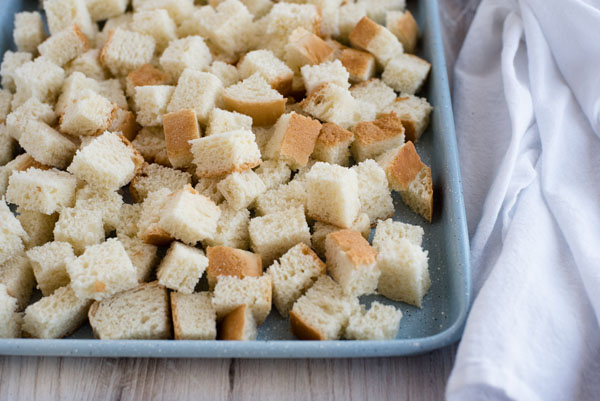 Difference Between Stuffing and Dressing

My mom always called it stuffing, so it just feels strange to call it anything else.

We had a lot of conversation in the Electric Pressure Cooker Facebook group on what to call this recipe—stuffing, dressing, filling, or something else!

Some people distinguish between the terms based on whether or not it’s cooked inside the bird. (But that distinction didn’t hold everywhere—many of you used only one term no matter where it cooked!)

Since there was no clear winner, I’ll keep calling this recipe stuffing even though it’s technically dressing. 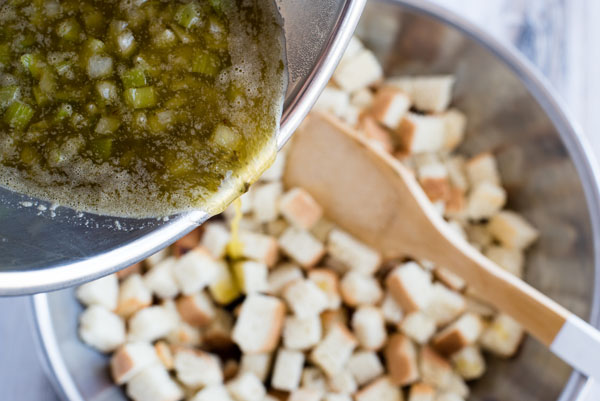 Dry Bread Is the Secret to Great Pressure Cooker Stuffing

Use dry bread. You can leave your bread out to dry the day before. Or, you can toast it in the oven before cooking.

If you’re toasting it, I like to spread the cubed bread flat on a baking sheet and bake at 350°F for 20 minutes, stirring once or twice to ensure it toasts evenly. Cool the bread completely before you start the recipe.

Don’t skip this step! It helps the bread absorb moisture without becoming mushy. 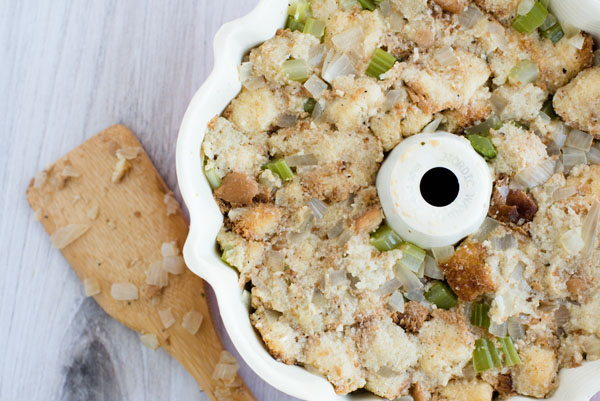 My family loves the crispy edges of the stuffing. (Does anyone else’s family fight over the corner piece?) I like to pressure cook stuffing in a bundt pan to maximize the crispiness—plus, having metal in the center of the dish helps it cook more quickly.

The half-size bundt pan holds a surprising amount of stuffing! I can fit my entire traditional oven recipe in my half-size bundt—about 10 cups of cubed bread.

However, since you use the pot in pot method for making this pressure cooker stuffing, you can use any oven-safe dish that will fit in your pressure cooker. If you use a cake pan or a springform pan, you may need to add extra cook time to ensure the middle is cooked through completely. 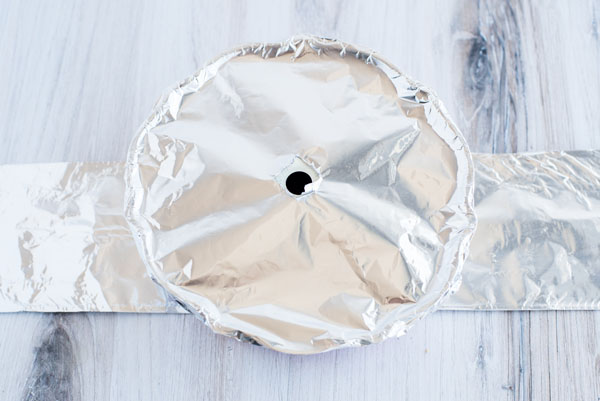 How to Know Your Thanksgiving Dressing Is Cooked Through

The easiest way is to use an instant read thermometer. Your stuffing is done when the internal temperature has reached 160°F. 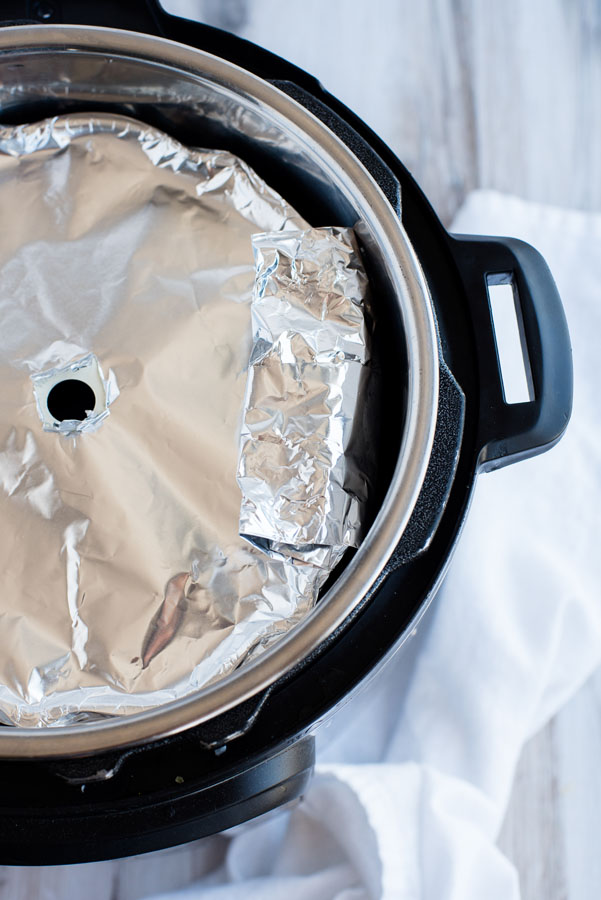 Crisp Up the Top

My family prefers a crispy stuffing, so to maximize crispness, we always turn out the pans to brown up the edges of the stuffing after the turkey is out of the oven. Two half-size bundts can fit on one standard-size baking sheet if placed corner to corner.

However, if you have a Ninja Foodi, Mealthy CrispLid, or Instant Pot Duo Crisp (review coming soon!), you can brown up the stuffing right in your cooking pot! 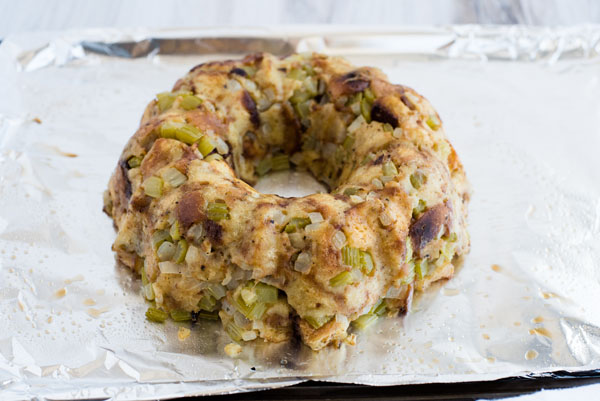 You can cook Instant Pot bread stuffing the day before and crisp it up in the oven before serving. After pressure cooking, remove the stuffing from the bundt pan and allow it to cool to room temperature. Cover tightly and refrigerate. (This method also works well if you need to make several batches of Thanksgiving stuffing to feed a crowd!)

On Thanksgiving Day, once the turkey is out of the oven, bake at 350°F for 10 to 15 minutes until the stuffing is warmed through and crisp. 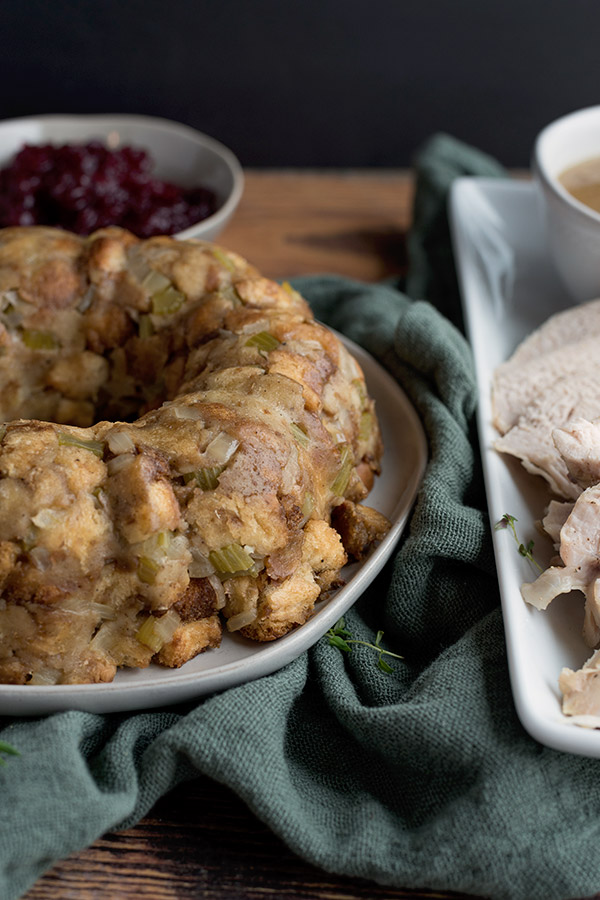 Use Your Own Seasonings

This recipe makes a great template for you to adapt your favorite stuffing recipe to the pressure cooker. Just make sure the amounts of bread are similar, then adjust your seasonings accordingly!

This recipe creates a salty, savory stuffing. If you use salted butter or full sodium broth, you may want to reduce the amount of salt you use in this recipe. 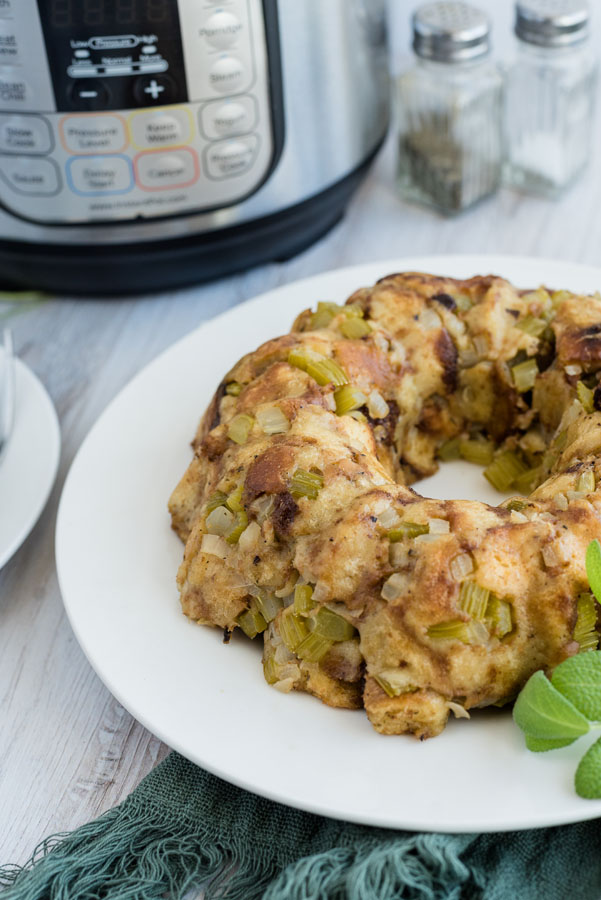 What’s your term for Dressing/Bread Stuffing? Let me know in the comments!

We made a fun video to show you how this Thanksgiving stuffing recipe comes together. The original recipe called for sauteing the onion and celery in a sauce pan on the stove. However, since many pressure cookers allow you to adjust the heat level of the saute feature, I’ve updated the recipe to prepare it in the pressure cooker itself, to save yourself from dirtying a pan

*Spread the cubed bread flat on a baking sheet and bake at 350°F for 20 minutes, stirring occasionally to ensure the pieces toast evenly. You can also use day-old stale bread.

**If your pressure cooker doesn't allow you to saute on low, you can combine the butter, celery, onions and broth in a saucepan on medium-low heat.

Nutrition information is calculated by Nutritionix and may not always be accurate. 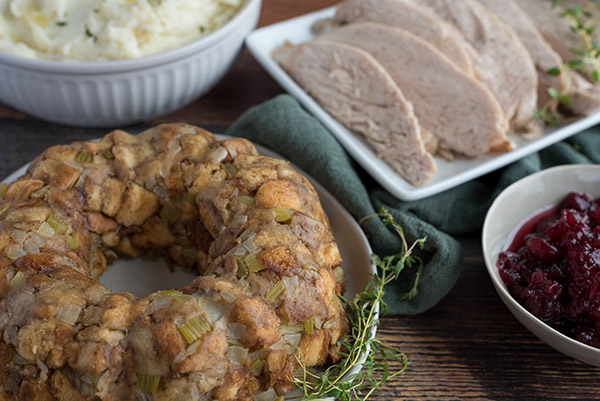 This recipe is one of my Pressure Cooker Thanksgiving recipes. Check out the other recipes in the series! 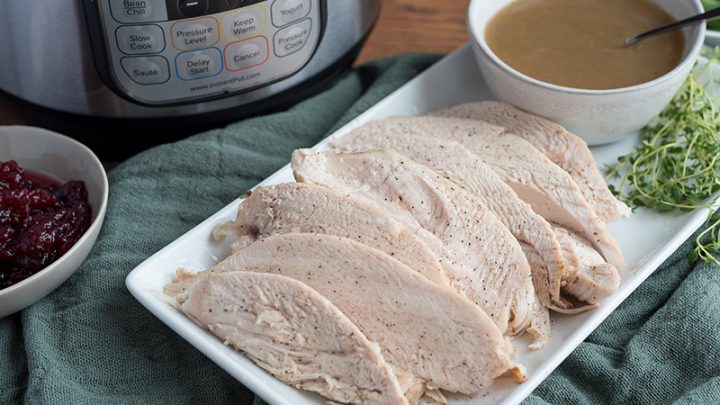 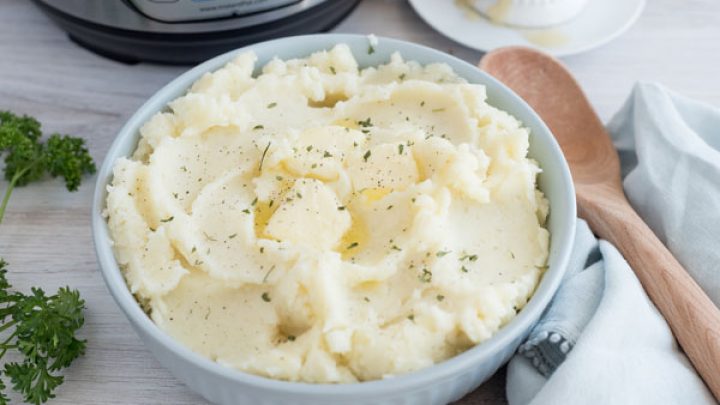 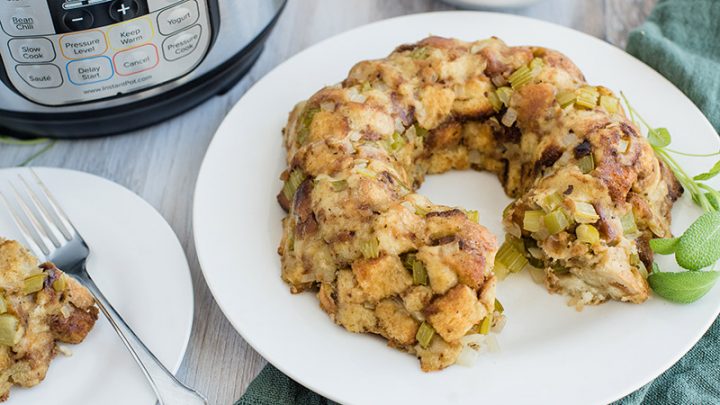 Pressure cooker stuffing is a great new way to cook your Thanksgiving stuffing. It's quickly "baked" in the pressure cooker and then crisped up in the oven before serving. 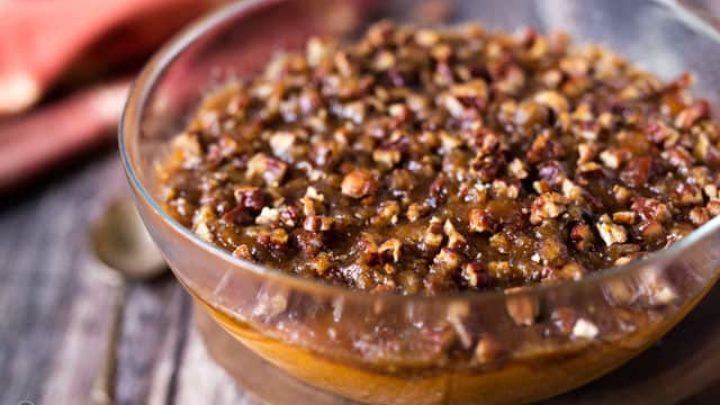 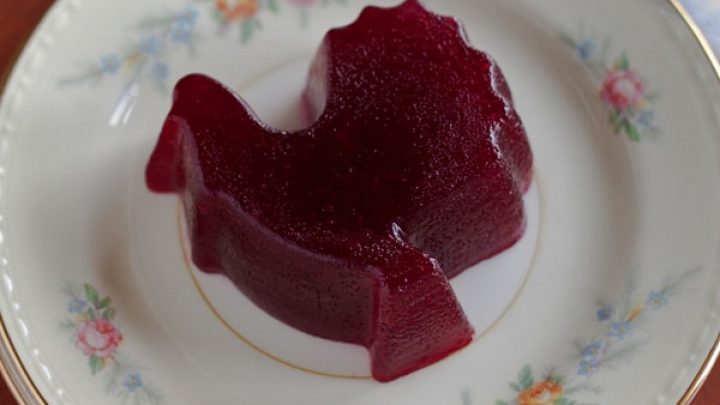 Cranberry jelly is quick and easy, and SO much better tasting when you make it at home in your pressure cooker. 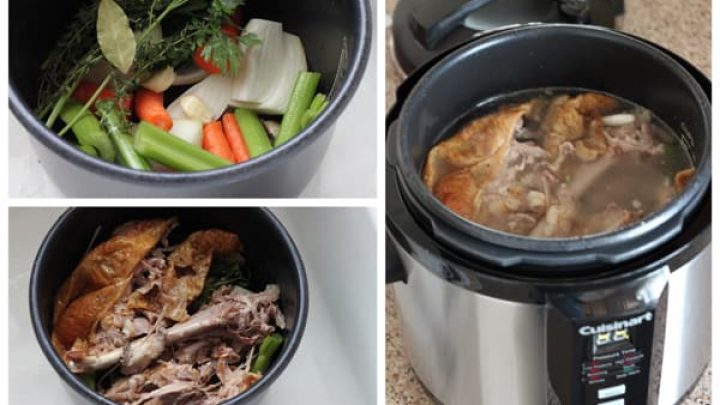 Take your gravy to the next level! Pressure Cooker Turkey Stock tastes like stock that’s been simmered on the stove for hours, but it cooks in a fraction of the time. 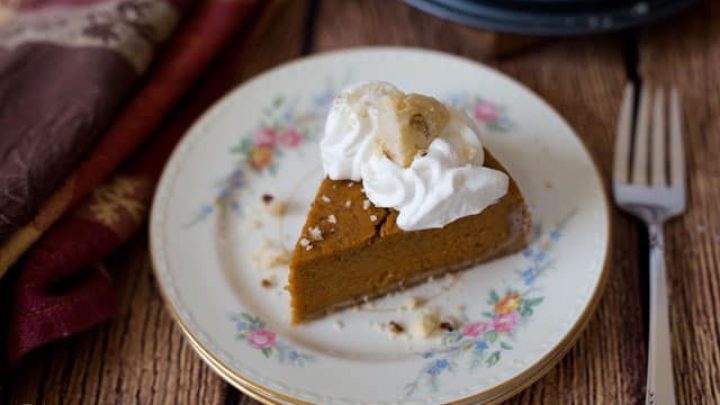 This Pressure Cooker Pumpkin Pie has a classic pumpkin pie filling in a crumbly Pecan Sandies cookie crust, so it's perfect for the pressure cooker! 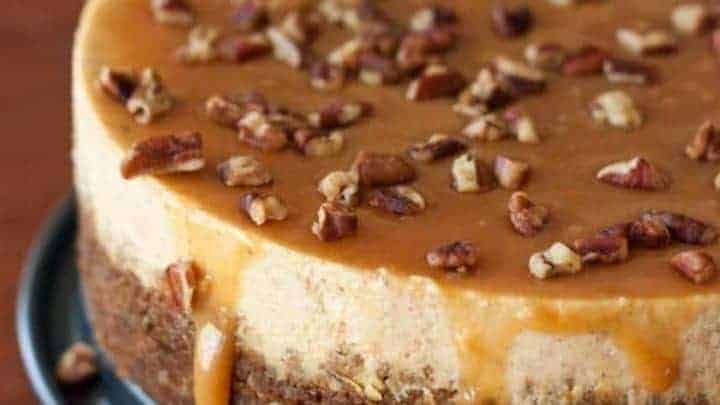 For the non-traditionalists out there! This cross between cheesecake and pumpkin pie is amazing when topped with creamy caramel and crunchy pecans.